"Nothing in life is to be feared, it is only to be understood. Now is the time to understand more, so that we may fear less." -- Marie Curie

Tesla Explodes Into Flames On Pennsylvania Highway, Requires 24X More Water To Extinguish Than Gas Car
A Tesla exploded into flames on a Pennsylvania highway this week and spewed toxic fumes from its lithium ion battery for a considerable amount of time because it took firefighters a significantly longer period of time to extinguish the fire compared to vehicles that use a standard combustion engine.
By: mayaleo
Tags: CURRENT EVENTS
Posted on: Nov 19 09:54
CRYPTO FRAUD EXPOSES WOKE CAPITALISM AS A SCAM

Sam Bankman-Fried, the founder of FTX, which was, until last week, the world’s second-largest cryptocurrency exchange, is today facing prison time for allegedly defrauding his customers of billions of dollars. Bankman-Fried, 30, donated to many progressive causes allied with the “effective altruism movement,” including pandemic prevention and response. He spoke at, and presumably donated to, the World Economic Forum’s Davos conference last May and the Clinton Foundation’s Clinton Global Initiative in September. Bankman-Fried is similar to Bernie Madoff in that both men used philanthropic giving, and the veneer of humility, to create a positive reputation while running pyramid schemes that should have set off red flags among investors, regulators, and journalists.

In truth, the Bankman-Fried scandal shows that all do-gooder capitalism should set off red flags. Bankman-Fried claimed he was only trying to get rich in order to raise money for charity, and investors and journalists overwhelmingly took him at his word, even while visiting him at his $40 million home in the Bahamas. “You were really good at talking about ethics for someone who kind of saw it all as a game with winners and losers,” a Vox reporter said to Bankman-Fried last night, to which he responded, “ya, hehe… I feel bad for those who get fucked by it. By this dumb game we woke westerners play where we say all the right shiboleths [sic] so everyone likes us.”

By: MikeRivero
Tags: ECONOMY, POLITICS/ ELECTIONS/ CORRUPTION
Posted on: Nov 19 09:35
Mike Rowe Sounds The Alarm On Men Not Wanting To Work Anymore
Mike Rowe told Fox News this weekend that men are becoming soft and lazy in part due to how much time they are spending on screens instead of working.
By: orraz
Tags: CURRENT EVENTS
Posted on: Nov 19 09:24
Democrat Adam Frisch concedes race against Lauren Boebert as it goes to recount

Democrat Adam Frisch conceded Friday in his tight U.S. House race against Republican Lauren Boebert that is likely headed to a recount, but highlighted how his surprisingly strong showing revealed that Republican voters in the sprawling Colorado district are tiring of Boebert’s brash style.

The Associated Press has declared the election in Colorado’s 3rd Congressional District too close to call. AP will await the results of a potential recount to call the race. With nearly all votes counted, the incumbent Boebert leads Democrat Adam Frisch by 0.16 percentage points, or 551 votes out of nearly 327,000 votes counted. 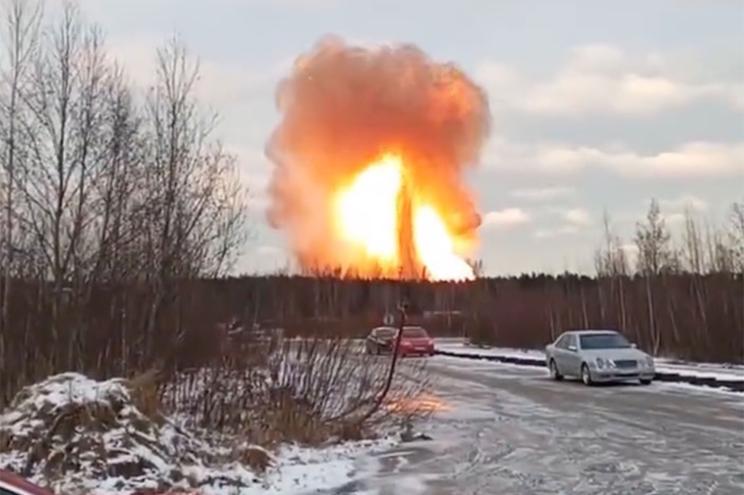 A giant fireball was reportedly seen rising over the Russian city of St. Petersburg after a nearby gas pipeline explosion.adagamov/Twitter

A giant fireball was reportedly seen rising over the Russian city of St. Petersburg Saturday after a gas pipeline explosion in a nearby town.

Video of the blaze showed flames rising in a mushroom-like cloud over Vsevolozhsk, a town east of St. Petersburg. If you don’t hold crooks in the government accountable for their corrupt acts, they’ll do them again.

In all of these scandals, Weissmann’s actions have been consistently corrupt and abhorrent.

The hallmark of the Department of Justice for decades has been to seek justice not convictions and if that meant letting a guilty person go free to make sure the government did it all right, then that was supposed to happen.

But Mr. Weissman, he couldn’t spell the word “ethics” despite the fact somebody actually had him teach a course in it one time, I think over in England.  His mantra is ‘the end justifies the means’… he targets people, individuals. And you’re right, I had no doubt from the moment he was picked for the Mueller Special Counsel operation, that he would have filed RICO charges against President Trump and seized every asset he ever had, if there had been any way he could do that.

By: MikeRivero
Tags: COVER-UP/ DECEPTIONS/ PROPAGANDA, POLITICS/ ELECTIONS/ CORRUPTION
Posted on: Nov 19 09:15
JOE BIDEN AND THE CRIME FAMILY. INTERESTING TO APPEASE THE GOYIM.
By: MikeRivero
Tags: POLITICS/ ELECTIONS/ CORRUPTION, WHITE HOUSE
Posted on: Nov 19 09:13
Marjorie, Matt, and Others Call for Oversight on Ukraine Spending as US Runs Out of Weapons

Once again, Marjorie Taylor Greene is proving herself to be the true leader of the people in Congress.

If there was any “democracy” at all in this country, Marjorie would be made Speaker of the House. Instead, we’re going to get Kevin McCarthy, who represents literally no one. I don’t know a single person whose views align with the political positions of Kevin McCarthy. Like, I don’t think there is even a single person.

The US government is a complete scam, and the way they are scamming the people for the Ukraine is all the proof you need.

If the great lie of the Jewish globalist cabal is to smear anything pro-white as ‘white supremacist’, the great lie of White Advocates & Dissident Rightists(and conservatives in general) is to use the ‘left’ label on their persecutors. The Jewish-led Cabal is no more ‘leftist’ than pro-white groups are ‘white supremacist’. (There is a small faction of genuine white supremacists but half of them happen to be recalcitrant neo-nazi and the other half are Feds.) Both sides dare not name it as it really is. Jewish Power(that is behind all this ‘woke’ garbage) and the Right spectrum are both incapable of seeing it like it is or saying it like it is.

During the Trump administration, the FBI paid $5 million to an Israeli software company for a license to use its "zero-click" surveillance software called Pegasus. Zero-click refers to software that can download the contents of a target's computer or mobile device without the need for tricking the target into clicking on it. The FBI operated the software from a warehouse in New Jersey.

Before revealing any of this to the two congressional intelligence committees to which the FBI reports, it experimented with the software. The experiments apparently consisted of testing Pegasus by spying -- illegally and unconstitutionally since no judicially issued search warrant had authorized the use of Pegasus -- on unwitting Americans by downloading data from their devices.

When congressional investigators got wind of these experiments, the Senate Intelligence Committee summoned FBI Director Christopher Wray to testify in secret about the acquisition and use of Pegasus, and he did so in December 2021. He told the mostly pliant senators that the FBI only purchased Pegasus "to be able to figure out how bad guys could use it." Is that even believable?

Iran on Thursday accused its-arch enemy Israel and Western intelligence services of plotting to start a civil war in the Islamic Republic, now gripped by some of the biggest anti-government protests since the 1979 revolution.

"Various security services, Israel and some Western politicians who have made plans for civil war, destruction and the disintegration of Iran should know that Iran is not Libya or Sudan," Foreign Minister Hossein Amirabdollahian tweeted.

Tehran accuses Western adversaries of stoking nationwide unrest, which has been joined by Iranians from all walks of life since the Sept. 16 death of young Iranian Kurdish woman Mahsa Amini. She died while in custody after morality police arrested her for allegedly flouting the strict Islamic dress code.

The activist HRANA news agency said 362 people had been killed in the two-month-long protests, including 56 minors. It also reported that 56 members of the security forces had been killed, in addition to 16,033 people who were arrested.

Two false news reports have gone viral in recent hours due to sloppy sourcing and journalistic malpractice. As usual they both featured bogus claims about US-targeted nations, in this case Russia and Iran.

An article in Responsible Statecraft titled “How a lightly-sourced AP story almost set off World War III” details how the propaganda multiplier news agency published a one-source, one-sentence report claiming that Russia had launched a deadly missile strike at NATO member Poland, despite evidence having already come to light by that point that the missile had probably come from Ukraine. This set off calls for the implementation of a NATO Article 5 response, meaning hot warfare between NATO and Russia in retaliation for a Russian attack on one of the alliance members.

Mainstream news reports circulated the narrative that Poland had been struck by a “Russian-made” missile, which is at best a highly misleading framing of the fact that the inadvertent strike came from a Soviet-era surface-to-air missile system still used by Ukraine, a former Soviet state. Headlines from the largest and most influential US news outlets like The New York Times, CNN and NBC all repeated the misleading “Russian-made” framing, as did AP’s own correction to its false report that Poland was struck by Russia.

November 18, 2022: Information Clearing House -- "Middle East Eye" It is doubtful if more than a handful of Jews in Israel could tell you accurately how many raids the Israeli army conducted last week in Palestinian cities in the West Bank, the number of arrests they made, or the number of people they killed.

At the same time, it is doubtful if there were more than a handful of Israelis who had not heard of the shooting incident on a soldiers' bus in the Jordan Valley, on Sunday 4 September.

A Palestinian shooting at Israeli soldiers - as opposed to Israelis shooting at Palestinians - is not just an alarming “man bites dog” story that reverses the usual order, demanding extensive reports; in all of those reports, the event was defined as a terror attack and the Palestinian shooters as terrorists.

Not a word about how the shooting targeted soldiers of an occupying army and occurred on occupied land.

The Israeli media has a key role in shaping public consciousness to serve the establishment’s propaganda machine, while keeping the Israeli public thoroughly ignorant of the most basic facts.

The Israeli public, in general, has completely internalised the notion that, by definition, there is no legitimate Palestinian struggle for national liberation.

By: MikeRivero
Tags: ISRAEL, PALESTINE
Posted on: Nov 19 09:07
Ukraine - Switching The Lights Off

The careful destruction of energy systems in Ukraine continues.

From today's clobber list as provided by the Defense Ministry of Russia:

On 17 November, the Armed Forces of the Russian Federation launched a concentrated strike, using high-precision long-range air-, sea- and ground-based weapons, at the facilities of military control, defence industry, as well as related fuel and energy infrastructure of Ukraine.

The goals of the strike have been reached.

All the missiles have accurately stricken the assigned facilities.

I have no idea if the last line is true but it does not matter much.

Elon Musk is running a Twitter poll on whether he should reinstate former President Donald Trump to the platform, with early results showing slightly half of participants voting “yes.”

“Vox Populi, Vox Dei,” tweeted Musk, mere minutes after posting the poll at 7:47 pm Friday. The Latin phrase means “the voice of the people is the voice of God.” The poll was set to remain open for 24 hours.