"Experience teaches us to be most on our guard to protect liberty when the government’s purposes are beneficent." -- Supreme Court Justice Louis D. Brandeis

Chris Magnus, the commissioner of US Customs and Border Protection was pushed out of his job by DHS Chief Alejandro Mayorkas.

Russia considers the reconnection of the Russian Agricultural Bank to SWIFT to be a critical issue in moving forward in reducing barriers to local agricultural product exports, and will try to achieve it, according to Deputy Foreign Minister Sergey Vershinin.

"This is not the first time we've discussed it, because, in my opinion, reconnection of the Russian Agricultural Bank, which provides the majority of agricultural transactions, agricultural operations, is a critical issue. We simply cannot move forward without it. We've talked about this before, and yesterday we talked about it very substantively and for a long time, and we obtained reassurance from UN representatives that they, too, believe this is a critical issue," Vershinin said.

"We're working on it, and we will achieve it," the diplomat continued.

Russia is in favor of dialogue on all issues, but it should be a dialogue that takes into account its concerns and is aimed at creating indivisible security in the world, Russian Security Council Deputy Chairman Dmitry Medvedev said in an interview with Al Jazeera TV channel.

Commenting on his May Telegram post that lists 10 grim consequences of anti-Russian sanctions for the world, Medvedev stressed that these are not predictions, but "things that have already happened." "One can have different attitudes to it, one can believe that the horsemen of the Apocalypse are already on their way and all hope is in Almighty God. However, one can still try to tone down this international situation," the deputy chairman said.

According to him, Russia "has never shut itself off from international communication," and is ready to talk. President Vladimir Putin and other Russian politicians have repeatedly stated this at various venues.

Unlike the West, the Russian people will never give up their love for the country, faith and traditional values, Russian President Vladimir Putin said at a Victory Day parade on Moscow’s Red Square on Monday.

"We will never give up our love for the country, faith, traditional values, ancestral customs and respect for all peoples and cultures. As for the West, it seems to be determined to cancel these millennia-old values," he noted.

"This moral degradation paved the way for cynical falsifications of the history of World War II, attempts to incite Russophobia, glorify traitors, mock the memory of their victims and wipe out the bravery of those who fought and suffered for the Victory," the head of state stressed.

Senate Minority Leader, Kentucky Sen. Mitch McConnell, and House Minority Leader and California Rep. Kevin McCarthy are in a jam and their dreams of staying party leaders are in jeopardy.

Republicans are still likely to win a tiny majority in the House, not the red wave they expected, but what was considered a forgone conclusion a month ago, Rep. McCarthy becoming Speaker, is in danger.

“We need to have serious discussions within our conference as to why and what we can do to improve our chances in 2024,” they said. “Holding leadership elections without hearing from the candidates as to how they will perform their leadership duties and before we know whether we will be in the majority or even who all our members are violates the most basic principles of a democratic process. It is certainly not the way leadership elections should be conducted in the world’s greatest deliberative body.”

It could also mean that  Sen. McConnell may not remain as the Senate Majority Leader.

For the US, the lethal business of war is an immensely profitable business. The country saw massive increases in its GNP during the latter years of WWII and eight months into the Russia-Ukraine conflict it is clear that history is repeating itself, while Europe suffers. The US is also reaping the benefits of its pressure on Europe to stop energy inflows from Russia, so that they have to buy energy resources from the United States at a high price. Likewise, commodity prices are surging; inflation is galloping; debt servicing becomes unbearably expensive; capital flight is bringing vulnerable countries to the brink of economic disaster. Even advanced economies such as Britain, the European Union and Japan are not spared.

By: MikeRivero
Tags: ECONOMY, WAR/DRAFT/ VETERAN AFFAIRS
Posted on: Nov 13 07:31
They Rule Over Dysfunctional Ruin, but They Rule

Since 2008, we have lived in a western world shaped by the ‘permanent state’ or by our managerial technocrats – label to choice.

Since 2008, we have lived in a western world shaped by the ‘permanent state’ or by our managerial technocrats – label to choice.

This ‘creative class’ (as they like to see themselves) is particularly defined by its intermediary position in relation to the wealth-controlling oligarchic cabal as ultimate big money overlords on one hand, and the dullard ‘Middle Class’ below them – at whom they sneer and deride.

Mercenaries from more than 40 countries are currently engaged in combat near Zaporozhye, with the majority of them from Poland, Vladimir Rogov, who heads the We Stand With Russia movement, told TASS on Saturday.

"The number of [represented] countries has grown. Back a week ago, we said there were 34 confirmed countries, and now there are mercenaries from over 40 countries," he said.

The overwhelming majority of them are Poles, of which there are 5,000, Rogov specified. He also said Japanese, Australian, Canadian, French nationals and people from Spanish-speaking countries among mercenaries.

Rogov also recalled that more than a thousand mercenaries had already been killed in the city of Zaporozhye.

A Lehman squared moment is approaching with Swiss banks and UK pension funds under severe pressure.

But let’s first look at another circus –

The global travelling circus is now reaching ever more nations just as expected. This is right on cue at the end of the most extraordinary financial bubble era in history.

It is obviously debt creation, money printing and the resulting currency debasement which creates the inevitable fall of yet another monetary system. This has been the norm throughout history so “the more it changes, the more it stays the same”.

It started this time with the closing of the gold window in August 1971.  That was the beginning of a financial and political circus which continuously added more risk and more lethal acts to keep the circus going.

An economic upheaval always causes political chaos with a revolving door of leaders and political parties going and coming. Remember, a government is never voted in but invariably voted out.

What was always clear to a few of us was that the circus would end with all of the acts crashing virtually simultaneously.

And this is what is starting to happen now.

The following report on organizations receiving funding from the Catholic Campaign for Human Development (CCHD) for Fiscal Year 2020–2021 provides a list of clickable reports. Each of the organizations profiled received a grant from the CCHD, according to the latest reported list from the United States Conference of Catholic Bishops (USCCB).

Leading up to Sam Bankman-Fried's spectacular implosion - in which his firm FTX evaporated billions in wealth after the now-bankrupt cryptocurrency exchange allegedly commingled client assets with his trading firm into a liquidity crunch - he became the sixth-largest donor in this year's midterm election cycle, giving some $40 million to mostly Democratic candidates and causes. 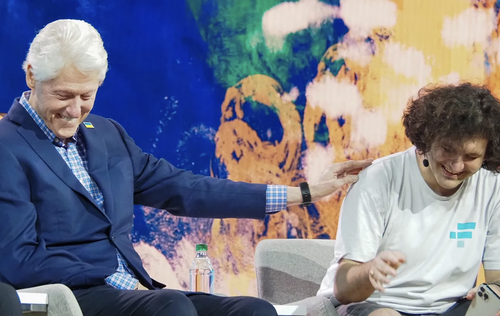 According to Forbes, Bankman-Fried was second only to George Soros among billionaire donors to Democratic groups during the 2022 midterm election cycle.

Israel's security service Shin Bet has been using a database collected from mobile phone companies to monitor the activity of journalists, in both criminal and security-related investigations, according to local media.

The information came to light in the state’s response to a petition filed by a civil rights group with the High Court, Haaretz reported on Friday.

Using the database, the agency can work out where a journalist is based on their mobile phone location, as well as whom they talked to and for how long, the newspaper said.

Under the petition, the Association of Civil Rights in Israel (ACRI) had asked the High Court to remove a clause from the law regulating Shin Bet's operations that compel mobile phone companies in Israel to provide the agency with information regarding every call or message passing through their operations.

Bush, 76, will host his The Struggle for Freedom conference in Dallas on November 16, while Obama's democracy conference will be held in New York City on the 17th.

Merced, California – A 9-month-old baby boy was shot dead in his stroller in a drive-by shooting on November 9 at 12:36 pm.

By: orraz
Tags: CURRENT EVENTS
Posted on: Nov 12 20:46
FTX Appears to Be a Political Ponzi Scheme Running Dollars to Politicians and Through Ukraine

As mentioned previously, the FTX crypto company gave at least $40 million to Democrat candidates and causes in the midterms.

By: orraz
Tags: CURRENT EVENTS
Posted on: Nov 12 20:46
Federal Judge Rules Bidens Decree Forcing Doctors To Treat Patients Based On Gender Identity And Not On Science Is Unlawful

Following a class action lawsuit filed by the America First Legal (AFL), a Trump-appointed federal judge ruled that Biden’s order forcing doctors to treat patients based on “gender identity” and not based on science is unlawful.

The Secret Service acted outside the military chain of command to scramble jets on 9/11 without the knowledge of the president, a newly declassified interview reveals.

The personal data of more than 145 million Americans is being indiscriminately handed over by the Biden regime’s State Department to various law enforcement and intelligence agencies for illegal and unconstitutional probing, according to a letter sent from Sen. Ron Wyden (D-Ore.) to Secretary of State Antony Blinken.

By: orraz
Tags: CURRENT EVENTS
Posted on: Nov 12 12:41
Nevada just voted a law into existence that will make it a CRIME to criticize transgenderism, even for children

By a margin of 57.1 percent to 42.9 percent, Nevada voters passed Nevada Question 1, which constitutionally enshrines sexual orientation and gender identity as specially protected classes that cannot be criticized or otherwise discriminated against.

Things are not looking good – at all – for Beyond Meat, which reported a wider-than-expected loss for its third quarter.

It is becoming harder and harder for ordinary people to eat in the United Kingdom, thanks to the worst cost-of-living crisis to strike the country in a generation.

A British man was sentenced to six months behind bars for selling mince pies and wine during the stringent Wuhan coronavirus (COVID-19) lockdown in the United Kingdom.

By: orraz
Tags: CURRENT EVENTS
Posted on: Nov 12 11:04
Walgreens decided to close three locations in Boston this week. Now the city is accusing the company of systemic racism and threatening consequences if the stores don't reopen

As often happens with large retail chains of any kind, Walgreens decided to close three Boston locations this week. The pharmacy chain's explanation for the closures implied that it did not make financial sense for the company to keep the locations open, blaming the "dynamics of the local market and changes in the buying habits of our patients."

By: orraz
Tags: CURRENT EVENTS
Posted on: Nov 12 11:03
Biden Battles Teleprompter And Bizarre Shrieking From The Audience At COP27

President Joe Biden appeared to struggle to read what was on his teleprompter during his Friday appearance at the United Nations conference on climate change — known colloquially as COP27.

Amidst the fallout from the meager Republican showing on Tuesday came a breath of fresh air, courtesy of one U.S. district court judge in Texas who took a sledgehammer to President Joe Biden’s attempt to bailout certain student loans — while also taking shots at President Barack Obama and every other leftist who believes in a living constitution.