"There are 14 or 15 million Americans who have the resources to have representatives in Washington to protect their interests, and that the interests of the great mass of the other people - the 150 or 160 million - is the responsibility of the president of the United States, and I propose to fulfill it." -- Harry S Truman

The European Union has warned Twitter owner Elon Musk that his tech platform could face a ban in Europe unless the site abides by its rules on content moderation.

EU commissioner Thierry Breton made the threat to Musk on Wednesday during a video meeting, wherein she said that Musk must adhere to a checklist of rules. This includes ditching an "arbitrary" approach to reinstating banned users and "aggressively" fighting off so-called disinformation, reports the Financial Times.

Scientists have devised a quantum experiment that allows them to study the dynamics of wormholes, theoretical spacetime entities that first emerged from Albert Einstein's 1915 theory of gravity, or general relativity.

Rather than creating an actual wormhole, a rip in time and space that is theorized to form a bridge between one distant region of space with another, the team built a wormhole model to run on a quantum processor. This allowed them to investigate the physics of wormholes and their potential connection to so-called 'quantum gravity.'

"We found a quantum system that exhibits key properties of a gravitational wormhole yet is sufficiently small to implement on today's quantum hardware," U.S. Department of Energy Office of Science research program Quantum Communication Channels for Fundamental Physics (QCCFP) principal investigator Maria Spiropulu, said in a statement(opens in new tab). "This work constitutes a step toward a larger program of testing quantum gravity physics using a quantum computer."

The U.S. Centers for Disease Control and Prevention (CDC) knew that COVID-19 shots damage recipients’ hearts and cause other serious complications but chose to cover up the information, bombshell documents unsealed under a court order have revealed.

The CDC was forced to hand over documents and data following a November 14 court order by Judge Robert Pitman.

The judge ordered the data to be made public following a Freedom of Information Act request from the Informed Consent Action Network.

The federal health agency has been withholding the data that shows adverse reactions to the vaccinations among those who received them.

Data released under the court order shows that a staggering 1 in 3 among the earliest populations to get vaccinated reported needing medical care, missing school or work, or they were unable to “perform normal daily activities” after receiving the shots.

The House of Representatives has passed a legislation that will force rail unions to accept the terms offered to help them by the Biden administration.

On Wednesday, in a 290-137 vote, House lawmakers voted to pass the legislation.

Those in favor of the legislation say that Congress had to act in order to prevent a strike and give workers what they are asking for. Those against the bill argued that it is not Congress’ place and that they were only voting on it because Joe Biden failed at the negotiation table.

The lower chamber weighed the resolution after top congressional leaders met with Joe Biden on Tuesday. Biden asked Congress to adopt the tentative agreement between railroad workers and operators after he failed to reach terms with all 12 unions. Despite calling himself the most pro-union president, Biden begged Congress to step in to prevent a strike, as a shutdown would be detrimental to the economy.

The September deal allowed for raises and bonuses retroactive to 2020. However, workers are stunned at the lack of paid sick time.

President Joe Biden hopes to push through a law that will essentially ban all assault weapons in America.

He cannot stand the fact that people have the right to defend themselves against evil powers that would seek to suppress freedom.

Fox News reported that Senator Chris Murphy from Connecticut blew Biden’s hopes of such a law out of the water by pointing out there are not enough votes to pass such a law.

Despite the obvious knowledge that infectious particles can be shared through respiration, whether other constituents of the nasal/oral fluids can be passed between hosts has surprisingly never even been postulated, let alone investigated. The circumstances of the present pandemic facilitated a unique opportunity to fully examine this provocative idea. The data we show provides evidence for a new mechanism by which herd immunity may be manifested, the aerosol transfer of antibodies between immune and non-immune hosts.

Katie Hobbs, Arizona's secretary of state and governor-elect, sued Cochise County officials Monday over not certifying the results of her gubernatorial election, two weeks after she was projected to win the race.

Cochise County officials reportedly voted against certifying the results of the gubernatorial election by the state's statutory deadline, prompting Hobbs to file the lawsuit.

The 53-page lawsuit urged Cochise County officials to confirm the results of the election, claiming that by law, the canvass would proceed with or without counting the county's votes if they did not meet the deadline.

Massive cuts are coming to the house that Turner built.

According to a report from The Hollywood Reporter, Warner Bros. Discovery has started to make massive layoffs at CNN; CEO Christ Licht says “It will be a difficult time for everyone,” in a memo to the company.

To my CNN colleagues,

Our people are the heart and soul of this organization. It is incredibly hard to say goodbye to any one member of the CNN team, much less many. I recently described this process as a gut punch, because I know that is how it feels for all of us.

Today we will notify a limited number of individuals, largely some of our paid contributors, as part of a recalibrated reporting strategy. Tomorrow, we will notify impacted employees, and tomorrow afternoon I will follow up with more details on these changes.

One of the most troubling things about the Biden regime has been the unequal application of the law we have seen. What has always made the U.S. special in the history of the world was not only its freedom but its rule of law. That’s why people came to us from troubled places all over the world, fleeing banana republics. Yet the Biden team seems to be intent on turning us into the banana republics that people have fled from.

We’ve seen the stark difference in the way that the Jan. 6 defendants have been treated versus the BLM or other leftist rioters. We’ve seen all kinds of tactics brought to bear when it comes to anything related to Jan. 6, whereas in a similar riot against the inauguration of President Donald Trump in Washington, D.C., on Jan. 20, 2017; most of those arrested had their charges dismissed.

One of the tactics raising concerns is the “geofence warrant” that I’ve previously written about.

There’s more from defense attorney Tara Fish, who takes it apart in her motion to suppress on behalf of defendant David Rhine. Fish argues first that the search was massively overbroad, first going through “millions of private accounts” to determine if any fit within the data of being in or near the Capitol. “The warrant was therefore unconstitutionally overbroad, a modern-day general warrant.” That’s a big problem because warrants have to be narrow and specific.

According to data from the DA office website, 39% of felony charges were downgraded to misdemeanors in 2019. From 2013 to 2020, under District Attorney Cyrus Vance Jr., the percentage of downgraded cases never exceeded 40%.

Since taking office in January, Bragg's office has won only 51% of prosecuted felony charges, compared to Vance's 68% in 2019.

Bragg has declined to prosecute 35% more felony cases this year compared to 2019.

Volkswagen’s CEO wrote that electric vehicle battery plants in the European Union are “practically unviable” at this moment due to soaring energy costs. 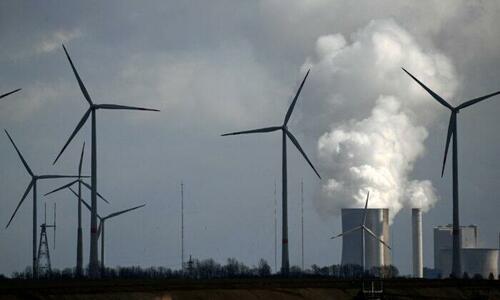 Further investment in key industrial projects such as battery cell plants in Germany and the EU are becoming more unfeasible due to policymakers inability to control skyrocketing long-term energy prices, according to the Chief Executive Officer for Volkswagen AG’s name brand, Thomas Schaefer.

Europe, and especially Germany, has been devastated by the loss of Russian energy exports to the bloc since the war in Ukraine and the Western sanctions on Moscow.

The EU, the UK, and the United States have all been facing a serious energy crisis for most of 2022.

Europe’s largest economy and the most dependent on Russian gas imports, Germany has seen its industrial output tumble due to high energy prices due to shortages.

Schafer warned that “the USA, Canada, China, Southeast Asia, and regions like North Africa are forging ahead.”

Here is a Real American, almost extinct today, a former prosecutor, challenging the scum Democrats in Maricopa county Arizona who stole the election from Kari Lake

Watch this and ask if you have this realization, this courage.

Making Car Batteries for all Electric Cars is 10 TIMES WORSE to Global Warming then DRILLING
By: alexmark
FTX Digital Markets gave 2,500,000 USD to RINO McConnell
By: alexmark
Prepare for Election Promises to Crumble
By: alexmark
Biden requests additional 31.7bn for Ukraine immediately after Poland missile explosion
By: malterwitty
US and Russia negotiate in Ankara. Biden predicts conflict freeze. Lavrov, G20 fake illness.
By: charliemc1
Poland Invokes NATO Article 4 Over Alleged Russian Missile Attack
By: malterwitty
PPI misses across the board again...Watch what happens once inflation relief turns into realization as to why inflation is dropping.
By: alexmark
'Russian bombs' kill two in POLAND: Border town hit by explosions sparking emergency meetings in Nato state
By: malterwitty
Amazon's new Prime Air drone offers 30-minute deliveries, flies 50 mph and drops packages from TWELVE feet in the air - nearly a decade after Jeff Bezos first announced drone delivery
By: malterwitty
How Did Maggie Hassan Get 1100 Votes in NH Town With a Population Under 700? UPDATE
By: alexmark
2 days after election 10,000 Amazon Employees to be let go, 60,000 Facebook Employees to be let Go, Musk still firing thousands at twitter
By: alexmark
FTX: Caroline Ellison, CEO of Alameda Research, Tumblr Social Media Account LEAKED: Her kink is men who control most major world governments
By: alexmark
Turkey refuses to accept U.S. condolences after terrorist attack in Istanbul
By: alexmark
Anon Claims He Found Absolute Proof of Voting Fraud in Arizona
By: alexmark
Michael Burry 13F portfolio is out! His portfolio is now over 50% in prison stocks.
By: alexmark
Best case scenario, bulls stage a short-covering rally each time they implode closer to full bailout. Worst case scenario, they panic and implode straight down to the bottom
By: alexmark
Dave Chappelle Tricked SNL Producers by 'Swapping in Edgy Monologue For Live Show'
By: ChrisMenahan
Twitters potential collapse could wipe out vast records of recent human history
By: malterwitty
Whats going on? Cameras went dark in Nevada ballot counting facility as final results were delayed
By: malterwitty
Tucker Carlson calls for ending use of ALL electronic voting machines and return to paper ballots
By: malterwitty