"All men recognize the right of revolution; that is, the right to refuse allegiance to, and to resist, the government, when its tyranny or its inefficiency are great and unendurable." -- Henry David Thoreau (1942). "Civil Disobedience"

In earlier versions of a story published November 15, 2022, The Associated Press reported erroneously, based on information from a senior American intelligence official who spoke on condition of anonymity, that Russian missiles had crossed into Poland and killed two people. Subsequent reporting showed that the missiles were Russian-made and most likely fired by Ukraine in defense against a Russian attack.

For more than a decade, the family of a woman stabbed 20 times — including 10 from behind — has battled to have the Philadelphia medical examiner’s ruling that her death was a suicide overturned.

Ellen Greenberg, a 27-year-old teacher, was found covered in bruises and stabbed to death in her apartment during a blizzard more than a decade ago. Despite the blood-soaked crime scene, evidence her body had been moved and stab wounds to the back of her skull, investigators found “no evidence of a struggle in the kitchen area or anywhere else in the apartment.”

Dr. Marlon Osbourne, a former pathologist at the Medical Examiner’s Office in Philadelphia, initially ruled the death a homicide, based on the injuries, then backtracked and revised the manner of death to suicide after conferring with city police, according to a civil lawsuit from Greenberg’s family.

An appeals court heard arguments in a civil lawsuit this week and will decide whether it can move to trial.

Lawyers on both sides of the appeal made their cases before a three-member panel of the Commonwealth court Tuesday, Joe Podraza, an attorney for Greenberg’s parents, told Fox News Digital.

Former President Donald Trump announced on Tuesday night that he will be running for president in 2024. The 45th president also filed his paperwork with the Federal Election Commission, ending months of rumors and speculation that he would make a third run for the White House.

“My fellow citizens, America’s comeback starts right now. In order to make America great and glorious again, I am tonight announcing my candidacy for president of the United States,” Trump told a cheering crowd at Mar-a-Lago, adding that he would “fight like no one has ever fought before.”

“Our country could not take four more years,” he said. “They can only take so much. I am running because I believe the world has not yet seen the true glory of what this nation can be. We have not reached that pinnacle, believe it or not.”

Ex-MSNBC host Tiffany Cross learned that she was getting pushed out days ahead of her exit — and threatened to “go out in a blaze” and “take down” the cable-TV network and its boss Rashida Jones, The Post has learned.

The controversial anchor — whose weekend show “The Cross Connection” was abruptly canceled earlier this month as MSNBC elected not to renew her contract, according to sources — began frantically calling other journalists, media executives and social activists a week before her ouster in a bid to rally support, a source with knowledge said.

“She made calls saying: ‘I’m going out in a blaze and I’m taking down the network and going after Rashida,'” a source close to the situation said, paraphrasing Cross.

MSNBC execs and Jones, the network’s president, did not get wind of the phone calls until after Cross was let go, sources told The Post. It is unclear how Cross knew of her looming dismissal, but insiders speculated that her agent had been given the news while trying to negotiate a new contract for his client.

“We know our rights as parents, and we know that, right now, our rights are being infringed upon,” the mother said to the board.

She pushed back against a claim that the book should go back on the shelf in Dearborn schools, stating her refusal to return it and saying she would pay the library fine in consequence.

Puberty blockers and their appalling side-effects are at last getting some attention.

Australian gender clinics like the one at the Royal Children’s Hospital Melbourne claim that the use of puberty blockers are safe and reversible. Studies are now proving that not to be the case.

Sweden, Finland and the UK have stopped prescribing the drugs to children while their safety and effectiveness are being determined.

Many health practitioners in the US are calling for a review in the wake of the startling Cass Report in the UK that questioned the safety of such treatments. Parents are also expressing great concern, after learning that puberty blockers have a dreadful effect on bone density.

When a 10-year-old boy showed up to school in New York with a tattoo on his arm last month, the school nurse called the police, and both the child’s mother, who had given permission, and the unlicensed tattoo artist, were arrested.

This event prompted a renewed discussion about varying minimum age restrictions for tattoos across the US, leading one doctor, who was also the author of the American Academy of Pediatrics (AAP) guidance on tattoos, to state that children under 18 don’t have the agency to consent to putting a permanent mark on their body. This is the same professional association that endorses minors consenting to being chemically castrated and having bilateral mastectomies in the name of gender affirmation.

By: MikeRivero
Tags: CURRENT EVENTS
Posted on: Nov 16 16:23
Mitch McConnell Challenged For Leadership, Could Be Done

Senate Minority Leader Mitch McConnell is not assured to be the leader of his Party in the Senate again. The Kentucky Senator served as Senate Majority Leader when Republicans were the majority and Minority Leader after Democrats won the chamber, but now he is facing a challenge to his leadership, the Wall Street Journal reported.

“We must start saying what we are for, not just what we are against. I do not believe we can simply continue to say the Democrats are radical, which they are. Republican voters expect and deserve to know our plan to promote and advance conservative values,” Florida Sen. Rick Scott, the current chairman of the National Republican Senatorial Committee, said. “We need to listen to their calls for action and start governing in Washington like we campaign back at home. There is a Republican Party that is alive and well in communities across America. It is time there is one in Washington, D.C., too.”

“Like each of you, I am deeply disappointed by the results of the recent election. Despite what the armchair quarterbacks on TV will tell you, there is no one person responsible for our party’s performance across the country. I know there is no shortage of people who are eager to point fingers and assign blame here in Washington, but I won’t be one of them. It’s unproductive and a massive waste of time. We know that chief among our problems in races across America was a lack of Republican voter turnout. There may be many reasons for that, but after traveling the country to support our candidates I believe voters want a plan. They are begging us to tell them what we will do when we are in charge. Unfortunately, we have continued to elect leadership who refuses to do that and elicits attacks on anyone that does. That is clearly not working and it’s time for bold change. The voters are demanding it,” he said.

Artemis I is an uncrewed flight test that is the first mission to use NASA's Space Launch System (SLS) and the Orion spacecraft. It will be followed by a crewed flight on Artemis II.

It also states that Krasner engaged in "misbehavior in office in the nature of violation of the rules of professional conduct and code of judicial conduct; specifically rule 3.3 Candor toward the tribunal, rule 8.4 professional misconduct, and Canon 2 of the Code of Judicial Conduct Impropriety and appearance of impropriety in the matter of Robert Wharton v Donald T. Vaughn," as well as in the "matter of Commonwealth v Pownall."

Pennsylvania governor-elect Josh Shapiro, who rose to prominence by downplaying Republican claims of voter fraud, charged one of his former campaign consultants on Wednesday with "wide scale" forgery of voter ballots.

Shapiro, in his capacity as Pennsylvania attorney general, alleges that Philadelphia political consultant Rasheen Crews duplicated more than 1,000 signatures on petitions to add his clients to Democratic primary ballots for Philadelphia city elections in 2019.

"By soliciting and organizing the wide scale forgery of signatures, the defendant undermined the democratic process and Philadelphians’ right to a free and fair election," Shapiro said in a statement announcing the charges.

The announcement of the indictment just a week after the gubernatorial election could raise questions for Shapiro, who was a strident critic of Republicans who cast doubt on the results of the 2020 election in Pennsylvania. According to an arrest affidavit, Shapiro’s office opened an investigation into Crews in September 2019. It is unclear why it took three years to bring charges against him.

Indiana has agreed to a tentative multistate settlement with Walmart over allegations the giant retailer contributed to the opioid crisis by improperly overseeing its pharmacies. The agreement will secure $53 million in payments to the state, bringing Indiana’s total in opioid-related settlement payments to nearly $573 million.

“The opioid crisis has devastated far too many Hoosier families,” Attorney General Todd Rokita said in a statement announcing the Walmart settlement. “We continue working aggressively to hold accountable those companies whose actions have contributed to the opioid epidemic. Further, we are committed to bringing much needed funding to fight the drug crisis in Indiana.”

With up to $2 billion of customers' money missing, FTX founder Sam Bankman-Fried may be extradited back to the United States from the Bahamas.

The 30-year-old is at the center of a huge cryptocurrency controversy, after it was revealed that his crypto exchange had been "funneling money to a sister trading company run by his girlfriend," according to The New York Post.

Senate GOP Leader Mitch McConnell has won a secret-ballot leadership election after days of finger-pointing over the Republican election losses, putting him on pace to become the longest-serving Senate party leader in US history.

McConnell defeated Florida Sen. Rick Scott, his first challenger in his 15 years atop his conference.

McConnell won the leadership vote 37-10-1, according to two senators. One senator voted present.

After a tense meeting Tuesday that lasted several hours – the first in-person meeting for the Republican conference since the midterms – Scott told reporters he planned to challenge McConnell for the top job.

“I’m running for leader,” the Florida Republican told reporters. “I’m not satisfied with the status quo and so I think we ought to have an option.”

He added: “I still think we ought to delay the election.”

Rep. Lauren Boebert on Monday continued to maintain a thin lead over her Democratic challenger on Monday in her bid to win a second term following redistricting in Colorado that made her district more competitive.

As of Monday afternoon, Boebert led Adam Frisch by 1,122 in Colorado’s 3rd Congressional District. Political analysis site FiveThirtyEight gave her a 97-percent chance of holding the seat in its last election update on Nov. 8, Election Day. The seat has traditionally been Republican.

Still, at the moment, Frisch is running neck and neck with Boebert. 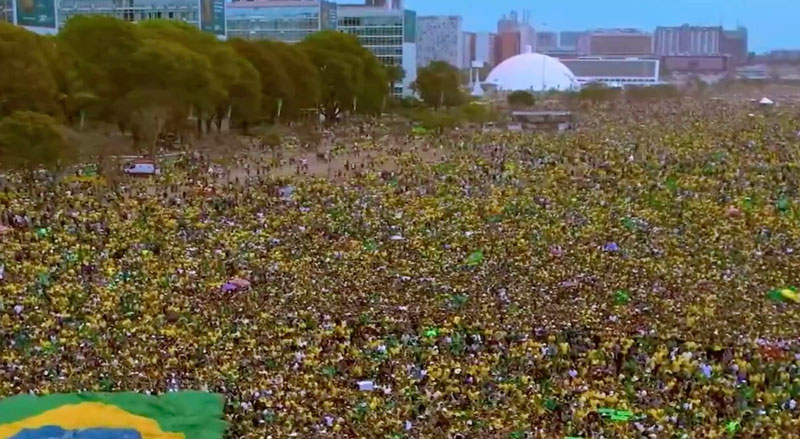 The people of Brazil have risen up against alleged voter fraud in the nation’s recent presidential election, with millions flooding the streets in protest.

During Tuesday’s national Republican Day, an estimated 3 million citizens took to the streets across the country and demanded the election be annulled.

Incumbent President Jair Bolsonaro and his party have responded by moving to annul the election.

Bolsonaro’s conservative Partido Liberal party presented its report and announced it will apply for the election’s annulment since the results could not be validated.

Webmaster addition: Good for the Brazilians!!!