One of the strangest parts of the COVID-19 pandemic has been all of the public health “experts” who openly lied to the American people while expecting to be lauded as heroes in response. Certainly, most have witnessed Dr. Anthony Fauci’s grotesque level of arrogance over the years, with numerous examples of the good doctor admitting to lying in order to get the outcome he desired from the public. For his efforts, he’s got magazine covers and million-dollar awards.

But we shouldn’t forget about Dr. Deborah Birx, the other half of Donald Trump’s initial COVID-19 advisory team. Though she has rarely drawn the same ire as Fauci, there’s little reason to believe she wasn’t just as duplicitous. As RedState reported recently, Birx is busy promoting her new book, and it contains several brazen admissions of dishonesty, including misleading the Trump administration by disobeying orders and altering reports.

The pigheaded stupidity based on unwarranted hubris I can understand, perhaps even sympathizes with. However, here Birx descends into what I think is criminality. Birx dishonestly and illegally changed the guidance and instructions issued by people senior to her, in particular those of President Trump. If she didn’t support what she was being told to do, she had an obligation to challenge those instructions openly and transparently and then do what she was told to do. If she didn’t like those orders, she was obligated to resign. Every person who died alone in a hospital room, every business driven into bankruptcy, and every child who lost a year of education due to Birx’s actions should be a count on a felony indictment.

On January 10 of this year, Biden met with Trudeau and the president of Mexico at the 10th North American “Leaders” Summit. While there, Biden signed the Declaration of North America. Here is what was inside it.

As of yesterday, a food additive made out of powdered crickets began appearing in foods from pizza, to pasta to cereals across the European Union. 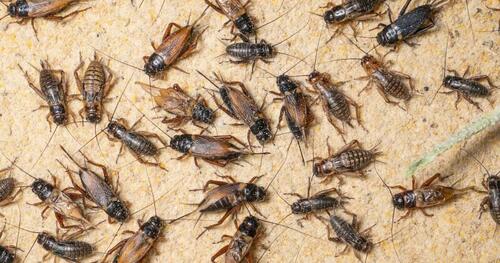 Defatted house crickets are on the menu for Europeans across the continent, without the vast majority of them knowing it is now in their food.

“This comes thanks to a European Commission ruling passed earlier this month,” reports RT.

“As per the decision, which cited the scientific opinion of the European Food Safety Authority, the additive is safe to use in a whole range of products, including but not limited to cereal bars, biscuits, pizza, pasta-based products, and whey powder.”

But don’t worry, because the crickets first have to be checked to make sure they “discard their bowel content” before being frozen.

Critics suggested that once bugs become widely accepted as a food additive, their consumption will become normalized across the board.

It takes a special kind of evil to prostitute and traffick a child for sex, and yet this evil walks among us every minute of every day.

Consider this: every two minutes, a child is bought and sold for sex.

Hundreds of young girls and boys—some as young as 9 years old—are being bought and sold for sex, as many as 20 times per day.

Adults purchase children for sex at least 2.5 million times a year in the United States alone.

In Georgia alone, it is estimated that 7,200 men (half of them in their 30s) seek to purchase sex with adolescent girls each month, averaging roughly 300 a day.

On average, a child might be raped by 6,000 men during a five-year period.

It is estimated that at least 100,000 to 500,000 children—girls and boys—are bought and sold for sex in the U.S. every year, with as many as 300,000 children in danger of being trafficked each year. Some of these children are forcefully abducted, others are runaways, and still others are sold into the system by relatives and acquaintances.

The Republican-controlled U.S. House of Representatives recently authorized formation of a new Select Subcommittee on the Coronavirus Pandemic. Peering into the murky Chinese origins of COVID-19, especially any connection to U.S. government funding, will be a top priority. And that’s as it should be.

Dr. Anthony Fauci will no doubt be a star witness. The former director of the National Institute for Allergies and Infectious Diseases at the NIH says he would welcome an invitation to testify on his role during the pandemic. Lawmakers should note, however, that in his recent deposition in the continuing case of The State of Missouri, et al. v Joseph Biden et al in the U.S. District Court for the Western District of Louisiana, Fauci responded to questions by saying that he could not recall… 174 times. New congressional inquiries might refresh his memory.

However, the subcommittee must concentrate more on “The Science” than on Dr. Fauci. Throughout the pandemic, federal officials who claim to represent “The Science” gave mixed messages. This left citizens eager to follow “The Science” frightened and confused.

Take, for instance, the issue of masking and mask mandates. The mixed messages had a tremendous effect on all Americans, especially schoolchildren.

103-minute video: Need to Know News: lucid analysis of current events (January 26, 2023)
By: Carl_Herman
Canada sending tanks!
By: alexmark
DRAFT IS INEVITABLE
By: alexmark
Last month's retail sales were the worst in a year, but consumers are supposedly "very strong"
By: alexmark
Data is showing companies who went on hiring sprees also now going on firing sprees. No Apple $AAPL mass layoffs... yet.
By: alexmark
NEW PROJECT VERITAS JUST DROPPED!!!
By: alexmark
This was the worst wealth destruction period seen since....ever...when adjusted for inflation
By: alexmark
'Let Everybody Pour In!': Louis CK Says U.S. Needs Open Borders as Punishment For Oppressing The Third World
By: ChrisMenahan
The market is overbought heading into ANOTHER Fed rate hike, while the Fed takes liquidity down to ZERO. Today's investors are not thinking about what could go wrong, only about what could go right...
By: alexmark
China's households were busy saving up like crazy while the rest of the world was partying post-pandemic...
By: alexmark
Healthcare inflation is about to surge
By: alexmark
This US City STILL Has Covid Eviction Ban
By: alexmark
'Golden Demon' Statue Placed Atop New York Courthouse to Honor Ruth Bader Ginsburg and Abortion
By: ChrisMenahan
Something odd is happening when you Google Search for "Pfizer Project Veritas"
By: alexmark
NYT is a day late and $113 billion short
By: alexmark
Trend Topic Of The Day: #pfizerliedpeopledied And #excessdeaths : Will Anyone Go To Jail? Politicians? Fauci? UN? Big Social Media Fact Checkers?
By: alexmark
Huge asteroid the size of a LONDON BUS will fly within 2,100 miles of Earth tonight - the fourth closest approach to our planet on RECORD, NASA reveals
By: malterwitty
WORLD WAR III HAS BEGUN, AND HUNDREDS OF MILLIONS OF PEOPLE WILL DIE
By: alexmark
British Regulators Limit Covid Vaccines
By: alexmark
Italian mother wears shocking T-shirt showing her 18-year-old daughter's dismembered body as she attends court appeal for failed asylum seeker convicted of killing her and chopping her up
By: malterwitty