The Russian Navy is set to receive a new 400km range surface to air missile, according to defence industry sources cited by the state media outlet TASS on February 4. The missiles will be integrated onto the Project 22350M frigates, an enlarged version of the Project 22350 Admiral Gorshkov Class frigates which are currently considered among Russia’s most capable surface combatants.  The Gorshkov’s Poliment-Redut missile launchers, which are expected to be integrated on their larger successors in much greater numbers, currently deploy surface to air missiles with maximum ranges of 150km, meaning the new 400km range missiles will allow ships to control areas seven times as large. The missiles are widely speculated to be derived from the 40N6, which was developed to extend the range of S-400 air defence systems to 400km, or the closely related 9M82MD developed for the Army’s S-300V4 system. Both were designed to be able to engage even low flying fighter sized aircraft over the horizon by first climbing to extreme altitudes and then descending guided by an in-built active seeker. The 40N6 is prized not only for its range, but also its extreme speed exceeding Mach 14 which allows it to engage most classes of ballistic missile up to and including upper intermediate range designs. Testing has shown that even missiles travelling at speeds exceeding Mach 8 can be reliably targeted. Integrating a navalised variant of the missile would allow Russian frigates to potentially significantly contribute to strategic air defence, much as U.S., Japanese and South Korean AEGIS destroyers currently do using the SM-3 and SM-6 missiles. Unlike these three AEGIS operators, Russia has generally deployed its ballistic missile defences from ground based mobile launchers rather than ships. Integration onto the Gorshkov Class could thus provide new options for deployments which could complement S-400 and S-500 systems deployed on land.

The Russian government has claimed that NATO’s entire network of satellites, and more broadly the alliance’s entire military infrastructure, is working to support Ukraine’s war effort. "We see how NATO’s entire military infrastructure is working against Russia, and we see how NATO’s entire intelligence infrastructure, including reconnaissance aviation, and satellite groupings are working in the interests of Ukraine in a 24/7 mode," an official statement from the Kremlin alleged on February 1. The Russian-Ukrainian War, now in its eleventh month, has seen space capabilities play an unprecedentedly central role, with the collective satellite capabilities of NATO’s member states providing the Ukrainian Military and supporting armed groups with a considerable advantage due to the greater limitations faced by Russia’s own smaller network. This has included rapid provision of targeting data for missile and artillery strikes, which have taken a heavy toll on Russian forces and could become more dangerous still as the United States moves to supply longer ranged missiles. Several NATO members have walked a fine line between arming and supporting Ukraine and becoming active kinetic participants in the war efforts, with growing revelations of Western personnel on the ground supporting Ukrainian forces. On December 13, for example, British Deputy Chief of Defence Staff General Robert Magowan revealed that hundreds of Royal Marines had been carrying out high risk operations alongside Ukrainian government forces from April. The New York Times reported six months prior that a CIA ‘stealth network’ was at the crux of the war, referring to the U.S. as establishing within Ukraine “a stealthy network of commandos and spies rushing to provide weapons, intelligence and training... C.I.A. personnel have continued to operate in the country secretly, mostly in the capital, Kiev, directing much of the massive amounts of intelligence the United States is sharing with Ukrainian forces.” The “signs of their stealthy logistics, training and intelligence support are tangible on the battlefield,” the Times observed. “Commandos from other NATO countries, including Britain, France, Canada and Lithuania, also have been working inside Ukraine... training and advising Ukrainian troops and providing an on-the-ground conduit for weapons and other aid,” it added, stressing the sheer “scale of the secretive effort to assist Ukraine that is underway.”

Since the beginning of the Cold War the number of countries able to independently produce fighter aircraft has declined sharply, with advances in technologies and growing complexity and cost meaning that today only China and the United States can produce their top fighters without any foreign technologies or components. As fighters have become more sophisticated and costly with each generation, the numbers produced have contracted significantly. The most produced first generation fighter for example, the MiG-15 of Korean War fame, saw over 17,000 built the large majority in the Soviet Union. Such numbers were reached despite its technologies being superseded by the newer MiG-17 just three years after it entered service. By contrast the most produced fourth generation fighter, the F-16, has seen under 4,500 airframes built, despite having been in production for well over 45 years. In the Cold War years fighter production was dominated by the Soviet Union followed by the United States, with the USSR vastly outproducing the rest of the world in each generation, until the fourth generation where the production run of its most widely manufactured fighter, the MiG-29, was cut short by the state’s disintegration. 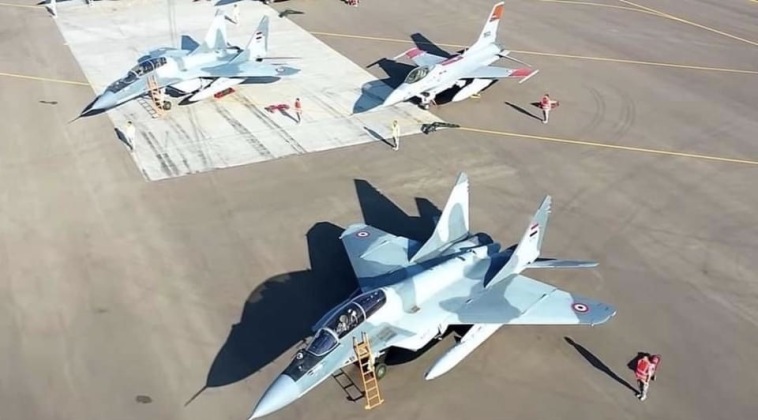 From the world’s second largest economy and largest defence spender, Russia’s much diminished economic status in the 21st century and smaller defence budget has meant that its fighter production is today dwarfed by the world’s two leaders China and the United States, which are respectively the world’s largest and second largest economies and spenders on defence acquisitions today. This status is reflected in the rankings of Chinese and American fighter programs in terms of the quantities being produced. Although China lacks the large network of overseas clients that the United States has, or that the Soviet Union once had, the needs of its own fighter fleet alone have been sufficient to propel it to leadership in the quantities being manufactured, with this paired with a comfortable qualitative edge over producers other than the United States leaving the two to compete effectively in a league of their own. A ranking and examination of the four fighters currently being produced on the largest scales provides strong indications of this, and is given below.

Girls are hitting puberty younger than ever, thrusting them prematurely into a new world of wild mood swings, physical discomfort, and self-doubt.

The phenomenon is called precocious puberty, which is being detected more and more in the Us. Decades of research point to a trending decline in the age of puberty onset.

In dozens of countries, the age of puberty in girls has dropped by about three months per decade since the 1970s. Now, it is not out of the realm of possibility to see signs of development in girls as young as six.

Webmaster addition:It's time to take a look at all the hormones added to farm animals to make them grow more and mature faster as a likely cause of America's obesity crisis as well as early puberty in both girls and boys.

Sentencing is still pending in the U.S. District Court of Missouri on a plea deal reached in a separate case, according to the DOJ.

The Arkansas case involved the misuse of $10,000 in campaign funds by Hutchinson. He failed to report $20,000 a month payments he received from a law firm, according to court documents. The former lawmaker also championed legislation that benefited an orthodontist in exchange for legal work, according to the DOJ.

By: MikeRivero
Tags: POLITICS/ ELECTIONS/ CORRUPTION
Posted on: Feb 05 10:19
AND TODAY'S DARWIN AWARD WINNER IS ...
By: MikeRivero
Tags: CURRENT EVENTS
Posted on: Feb 05 10:15
Sounds About Right: University of Chicago Taps Losers Beto ORourke and Tim Ryan to Teach Politics
When they aren’t hosting no-whites allowed events or teaching classes on “The Problem of Whiteness”, the University of Chicago is courting losers to teach at the insitution.
By: orraz
Tags: CURRENT EVENTS
Posted on: Feb 05 10:02
Biden praises Top Gun F-22 fighter jet pilot who shot down China spy balloon off the coast of South Carolina with a single missile - after the President vowed to 'take care of it' and the FAA closed airspace and three airports

Joe Biden praised the Top Gun fighter jet pilot who shot down the Chinese spy balloon off the coast of South Carolina today after he vowed to 'take care of it.'

An F-22 Raptor out of Langley Air Force base took the balloon down with a single AIM-9X sidewinder missile at 2.38pm, separating its surveillance payload and sending it plummeting towards the ocean off Myrtle Beach.

Webmaster addition: So, the smart move would have been to punch a few holes in the balloon envelope with some 20mm rounds from the aircraft cannon. This would have brought the balloon down slowly and with the payload intact for examination. Instead, the F-22 unleashed a Sidewinder missile, which costs about $300,000, blasting the payload into tiny bits.

MAYBE LOCKDOWNS AND PUBLIC PARK CLOSURES WERE A MISTAKE...
By: alexmark
Kim Johnson: Labour MP apologises for calling Israeli government 'fascist'
By: malterwitty
Hyperinflationary Hell: Lebanese Central Bank Devalues 'Lira' By 90%
By: malterwitty
Checkmate: Project Veritas rented an LED truck and parked it outside of Pfizer Headquarters...
By: alexmark
EU is officially adding creepy-crawlies to foodstuffs, thank God for Brexit - ALEX STORY
By: malterwitty
Corruption Rank by Country
By: alexmark
Facebook Admits Fact Checking Is Literally Propaganda
By: alexmark
Germany: Overwhelming Majority Want Nuclear Power, Survey Shows. Energy crisis leads to calls for continued operation
By: alexmark
New Zealand Was So Proud Of Their Covid Lockdowns They Now Want Climate Lockdowns
By: alexmark
Study finds gas-powered vehicles are more economical than EVs
By: malterwitty
Big Tech demand for cobalt drives SLAVE MINES in the Congo
By: malterwitty
The Nasdaq VIX shows there is not even the slightest sign of fear in this market. The volatility algos are working overtime to monetize put options and otherwise prevent a RISK OFF event
By: alexmark
Biden Documents Scandal Includes 1850 Boxes, Enough To Fill A Tractor Tailer, Plus 415 GB Of Eectronic Records
By: alexmark
ChatGPT refuses to create a poem admiring Donald Trump but creates a poem and admires Joe Biden. ChatGPT is built in with political biases.
By: alexmark
FBI searching Biden's beach home in Rehoboth for more classified documents: Agents scour property for files - after it was revealed National Archives were told to keep quiet about investigation
By: malterwitty
Boeing bids the 747 a final, ultimate, conclusive farewell
By: malterwitty
Chairman Comer Outs The DOJ For Silencing The National Archives From Discussing Classified Material Retrieved from Biden
By: IamShado
George Gammon: New Intel Suggests Economy Will Crash Hard
By: alexmark
Bombshell Discovery Reveals Zelensky Ordered Destruction Of ALL INFORMATION On Hunter Bidens Metabiota Company on Same Day as Russian Invasion
By: IamShado
Happenings Two Months Time Ago! US Case-Shiller National Home Price Growth Slows To 6.77% YoY In November As Fed Retreats (Down -0.54% Since October, 5th Straight Month Of MoM Price Declines)
By: alexmark