By: MikeRivero
Tags: CHINA, CLIMATEGATE
Posted on: Jan 21 07:39
EXCLUSIVE: Biden classified files were sent to ANOTHER D.C. location before they were stored at think tank - by team led by aide who'd been recommended by Hunter - sparking more questions about the documents debacle

The long and winding document trail that leads classified documents from Joe Biden's vice presidential office to the Penn Biden Center for Diplomacy and Global Engagement in Washington, D.C. and now back into the hands of the government, includes yet another stopover: a temporary facility in the nation's capital, a source tells DailyMail.com.

The documents were moved in the summer of 2017 after spending about six months at a government transition office near the White House once Biden left the vice presidency.

The space, in DC's Chinatown neighborhood, was overseen by the Penn Biden Center while its prized location near the Capitol was being readied. The office had its formal opening, attended by Biden, in 2018.

I’m no different from many Americans who still possess anger at how people were mistreated for questioning narratives, forced into struggling economic positions, and repeatedly lied to about the efficacy of lockdowns and vaccines by the most powerful people and institutions in the world.

I still possess animosity toward the formerly respectable so-called experts who’ve become compromised by their political biases and the fear of losing their high status in society if they were to divorce from the narrative and marry objectivity. How can I trust again a media apparatus that guilted an entire population of people into getting an experimental vaccine while simultaneously being sponsored by Big Pharma?

We all want a way to move forward, because anger only breeds more anger, not forgiveness. But it’s also not advisable for us to gloss over the damage that was done to appease the conscience of the people who are now remorseful for their participation in perpetuating falsehoods and who cheered on the social demise of dissenters.

Despite the call for a blanket amnesty discussed in the Atlantic’s op-ed titled “Let’s declare a pandemic amnesty,” I believe we should strive for something that’s more succinct in providing a form of justice that would relieve much of the bitterness that we’ve been carrying for years: COVID reparations.

The adoption of commodity-backed currencies by the Global South could upend the US dollar’s dominance and level the playing field in international trade...

First: One of the key take-aways from the World Economic Forum annual shindig in Davos, Switzerland is when Saudi Finance Minister Mohammed al-Jadaan, on a panel on “Saudi Arabia’s Transformation,” made it clear that Riyadh “will consider trading in currencies other than the US dollar.”

So is the petroyuan finally at hand? Possibly, but Al-Jadaan wisely opted for careful hedging:

A former Los Angeles County Deputy District Attorney who worked in its sex crimes unit is warning early releases of pedophiles from California prisons—due to a series of recent progressive laws—will lead to more children being victimized and harmed, in part because such criminals are rarely rehabilitated. 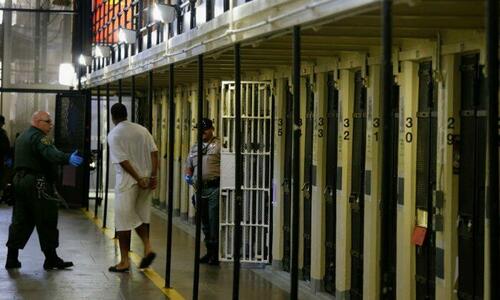 Stock photo of a condemned inmate led out of his east block cell at San Quentin State Prison, in San Quentin, Calif. on March 13, 2019. (Eric Risberg/AP)

Samuel Dordulian, who now heads the Dordulian Law Group out of Glendale, California, which specializes in such crimes, made the comments on a recent episode of EpochTV’s California Insider.

“It’s terrifying for me as a parent and it should be terrifying for every parent out there of a child,” said Dordulian, who worked in the DA’s office from 1995 until 2008.

During the 30-minute interview, Dordulian said he was surprised such criminals are released so quickly these days.

He said he only discovered such when a reporter from the Daily Mail reached out to him last year showing statistics that such criminals in California are, on average, being released in about 1 ½ years and sometimes within only months.

Data show mortality spike following release of covid vaccines had 1 in 391 BILLION chance of occurring by chance alone
By: malterwitty
Swiss National Bank posts stunning $143 billion loss
By: malterwitty
Pfizer Scientist Chris Croce Reveals Shocking Truth About mRNA Vaccine (hidden camera)
By: alexmark
Lorenz ransomware gang plants backdoors to use months later
By: malterwitty
Child prescriptions for powerful anti-psychotic drugs have doubled in 20 years with children as young as THREE getting them for reasons like autism and ADHD, 'worrying' study finds
By: malterwitty
Its all a scam: Green investors pay corrupt corporate media to promote climate change lie
By: alexmark
BAN ALL THE THINGS! The Attack on Things That Work:
By: alexmark
MP Andrew Bridgen has Tory whip removed after comparing COVID vaccines with Holocaust
By: malterwitty
Investigative Reporter Paul Sperry Shares DAMNING Details About Bug-Eyed Burbank Bolshevik Adam Schiffs Censorship Scheme to Silence January 6 Whistleblower Stories... . . . Threatens Legal Action... Trump Calls for Schiff to Be Prosecuted
By: alexmark
Teacher tried to use common sense when it comes to genders, but the students would have none of it!
By: alexmark
Rand Paul: 'Will Dems ever admit they were wrong?'
By: alexmark