"The masses have never thirsted after truth. They turn aside from evidence that is not to their taste, preferring to deify error, if error seduce them. Whoever can supply them w/illusions is easily their master; whoever attempts to destroy their illusions is always their victim." -- Gustave Le Bon

U.S. air marshals are reportedly staging a "mutiny" on the Biden administration over its immigration policies, as they plan to refuse mandatory deployment orders to the southern border and, therefore, face possible termination.

Though refusing the order puts them at risk of termination, dozens of air marshals argue that abandoning their current assignments will leave American fliers more vulnerable to threats over the busy holiday travel season.

Amid an influx of illegal immigrants held in custody, the Federal Air Marshal Service asked for volunteers to deploy to the U.S.-Mexico border for 30 days in mid-2021. But earlier this month, the Biden administration announced air marshals, considered federal law enforcement agents within the Transportation Security Administration, would face mandatory deployments as the shortage of Border Patrol agents worsens.

By: MikeRivero
Tags: IMMIGRATION/GLOBALISM, WHITE HOUSE
Posted on: Dec 01 08:03
IMF Chief Says US Must Keep Raising Interest Rates Because "They Owe It" To The World

The head of the International Monetary Fund (IMF), Kristalina Georgieva, has cautioned against the Federal Reserve slowing down with its interest rate hikes as it attempts to tame soaring inflation. 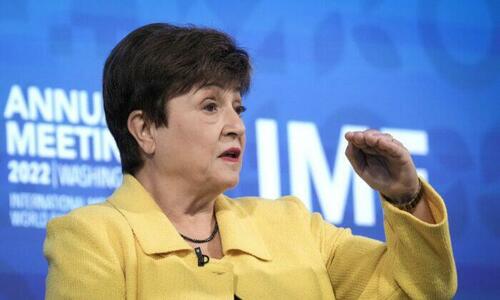 Speaking in an interview with The Associated Press on Tuesday, the IMF Managing Director was asked for her thoughts on pausing interest amid concerns that a strengthening U.S. dollar is weakening other currencies around the world, particularly those in poorer nations, and contributing to a cost of living crisis in those countries.

Georgieva said that the Central Bank “has no option but to stay the course” until the cost of living significantly declines.

This time for plans to reinstate banned Twitter accounts. According to Business Insider, Twitter employees call the plans “the Big Bang.”.

Imagine a government official that joined the Biden administration earlier this year stealing luggage from the Minneapolis-St. Paul airport’s baggage claim area and then lying about it? It could happen.

It did happen on September 16 when a senior Department of Energy (DOE) official Sam Brinton allegedly snatched a Vera Bradley suitcase from the luggage carousel.

A Buddhist temple in central Thailand has been left without monks after all its holy men failed drug tests and were defrocked.

The monks have been sent to a health clinic to undergo drug rehabilitation, the official said.

"The temple is now empty of monks and nearby villagers are concerned they cannot do any merit-making," he said.

Former President Bill Clinton announced Wednesday that he has tested positive for COVID-19.

He tweeted, “I’ve tested positive for Covid. I’ve had mild symptoms, but I’m doing fine overall and keeping myself busy at home.”

“I’m grateful to be vaccinated and boosted, which has kept my case mild, and I urge everyone to do the same, especially as we move into the winter months,” Clinton added.

By: MikeRivero
Tags: SCIENCE/ HEALTH/ CLIMATE/ NATURE
Posted on: Dec 01 07:42
Scientists Revive Worlds Oldest Frozen Zombie Virus Buried in a Frozen Lake in Russia, Sparking New Pandemic Fears
Scientists have revived the world’s oldest frozen “zombie virus” that has been dormant under a frozen lake in Russia for almost 50,000 years, prompting heightened fears of another global pandemic.
By: orraz
Tags: CURRENT EVENTS
Posted on: Dec 01 07:41
Cop Killer Kevin Johnson Executed in Missouri, Lawyer Claims He Was Sentenced to Die Because Hes Black
Kevin Johnson, 37, killed Kirkwood Police Sgt. William McEntee when he was called to his neighborhood over a report of fireworks.
By: orraz
Tags: CURRENT EVENTS
Posted on: Dec 01 07:41
Republican Senator Announces Run for Governor, Senate Seat up for Grabs in 2024

With the 2022 midterms now in the rear-view mirror, politicos are already looking forward to what the 2024 election will bring as sitting politicians have started making their moves.

One of those politicians making moves is Indiana GOP Sen. Mike Braun who has all but confirmed his intention of leaving his seat to run for governor of his state.

According to Fox News, the first-term senator has filed paperwork to run for Indiana’s gubernatorial race, leaving his seat open to a potentially crowded primary field.

Republican lawmakers in the Senate and House of Representatives are demanding that Congress hold off on passing the annual defense budget until a provision is added to strip President Joe Biden's COVID-19 vaccine mandate for military members.

More than 3,000 troops have been rendered inactive as of this past April with the rule going into effect, according to a letter co-led by Florida Sen. Rick Scott on Wednesday.

He and a dozen top senators including Rand Paul and Lindsey Graham are calling for a vote on an amendment to the National Defense Authorization Act (NDAA) that would see the vaccine provision removed in exchange for passing the bill.

A shocking video shows a Georgia teacher being repeatedly punched and attacked by a student inside a classroom.

The incident, which took place just before noon on Tuesday at Discovery High School in Lawrenceville, happened after a parent-teacher meeting the night before where the teacher told the student's parents he was underperforming.

The school board made changes earlier this year to ease standards for tribunals in an attempt to reduce discipline on minority students but it appears to have had an adverse effect, as school officials have reported a 31 percent increase in fights at schools this year.

The national political and military leaders who committed America to wars of choice in Vietnam, the Balkans, Afghanistan, and Iraq, did so as a rule because they were convinced the fighting would be short and decisive. American presidents, presidential advisors, and senior military leaders never stopped to consider that national strategy, if it exists at all, consists of avoiding conflict unless the nation is attacked and compelled to fight.

The latest victim of this mentality is Ukraine. In the absence of a critical root-and-branch analysis of Russia’s national power and strategic interests, American senior military leaders and their political bosses viewed Russia through a narrowly focused lens that magnified U.S. and Ukrainian strengths but ignored Russia’s strategic advantages—geographic depth, almost limitless natural resources, high social cohesion, and the military-industrial capacity to rapidly scale up its military power.

The New Orleans-based 5th U.S. Circuit Court of Appeals rejected an appeal by the Biden administration to reinstate its debt relief program.

The three-judge panel consisted of an appointee from each of the last three presidents, according to Politico. The Biden administration was appealing to overturn the Nov. 10 decision by Fort Worth, Texas-based U.S. District Judge Mark Pittman to strike down its student debt relief program, one of two legal rulings that crippled the $400 billion relief program, according to Reuters.

Amazon CEO Andy Jassy said Wednesday the company does not have plans to stop selling the antisemitic film that gained notoriety recently after Brooklyn Nets guard Kyrie Irving tweeted out an Amazon link to it.

Pressure has been mounting on Amazon to discontinue sale of the film, called “Hebrews to Negroes: Wake Up Black America,” since Irving shared the link to the documentary with his millions of Twitter followers in October. The synopsis on Amazon says the film “uncovers the true identity of the Children of Israel.”

At The New York Times’ DealBook Summit in New York City, Jassy said it is difficult for the company to determine what content crosses the line to where Amazon doesn’t make it available to customers.

“As a retailer of content to hundreds of millions of customers with a lot of different viewpoints, we have to allow access to those viewpoints, even if they are objectionable — objectionable and they differ from our particular viewpoints,” the Times quoted Jassy as saying.

President Biden is giving three native tribes $75 million to relocate their communities from Alaska and Washington shorelines to higher ground due to rising sea levels as part of a $135 million commitment for tribal relocation.

'As all of you know, there are tribal communities at risk of being washed away, washed away by Superstorm, rising sea levels, and wildfires raging,' Biden said during remarks at the Interior Department's Tribal Nations Summit.