"These people are so brainwashed that when the count sheep at night, they start with themselves." -- Richard Bauer

A study from the Massachusetts Institute of Technology (MIT) has found that the Earth is capable of regulating and stabilizing its temperature across vast timescales and even after dramatic changes in climate.

The Nov. 16 study published in Science Advances elaborated on the planet’s “stabilizing feedback system,” which has allowed the existence of diverse life-forms for the past 3.7 billion years or so. While this feedback has been assumed before, the study now serves as primary evidence for the existence of this system.

“You have a planet whose climate was subjected to so many dramatic external changes,” said MIT climate scientist and study co-author Constantin Arnscheidt. “Why did life survive all this time? One argument is that we need some sort of stabilizing mechanism to keep temperatures suitable for life. But it’s never been demonstrated from data that such a mechanism has consistently controlled Earth’s climate.”

The General Staff of the Armed Forces of Ukraine appealed to the Belarusians not to allow themselves to be involved in Russia’s war against Ukraine and warned of a possible terrorist attack at the Belarusian nuclear power plant.

"Boris has visited the Ukrainian capital many times. Boris Johnson has done and, I am sure, will continue to do all he can to ensure that Britain and world leaders will provide Ukraine with the help it needs," the Kiev mayor said.

China is ready to expand practical cooperation with Cuba and strengthen coordination on global and regional issues, Chinese President Xi Jinping said on Friday during a meeting with his Cuban counterpart Miguel Diaz-Canel.

"China is ready to cooperate with Cuba to deepen mutual political trust, expand practical cooperation, strengthen mutual support on issues of interest to both sides, and is ready to strengthen coordination on global and regional issues," China Central Television quoted the Chinese president as saying.

Xi Jinping also noted that Cuba was the first country in the Western Hemisphere to establish diplomatic relations with China.

"While the world has been focused on the dangerous situation at Zaporozhye, Europe’s largest nuclear power plant, we must not forget the country’s other nuclear facilities," Grossi said. He stressed that on Wednesday, for the first time ever, the three Kiev-controlled nuclear power plants, as well as the Zaporozhye site, "lost external power and were disconnected from the grid."

"They were all forced to rely on emergency diesel generators for the electricity they need to ensure their continued safety and security," the IAEA chief added.

Grossi emphasized that "this unprecedented situation would have been unimaginable just months ago" and "it is deeply worrying."

Russian forces obliterated a US-made AN/TPQ-37 counter-battery radar in the Donetsk People’s Republic in the past day during the special military operation in Ukraine, Defense Ministry Spokesman Lieutenant-General Igor Konashenkov reported on Wednesday.

"In the area of the settlement of Nikolayevka in the Donetsk People’s Republic, an AN/TPQ-37 counter-battery radar of US manufacture was destroyed," the spokesman said.

In the areas of the settlements of Volnyansk in the Zaporozhye Region and Chervonopopovka in the Lugansk People’s Republic, Russian troops wiped out two Ukrainian missile/artillery armament and ammunition depots, the general added.

Russian forces delivered fire by artillery guns and heavy flamethrower systems, thwarting an attack by Ukrainian marine infantry and eliminating over 30 enemy troops in the Kupyansk area in the past day, Konashenkov reported.

Wednesday, FNC host Tucker Carlson criticized the media for ignoring what he deemed to be the sexual exploitation of children, referring to Balenciaga’s child “bondage” ad.

According to the Fox News host, the lack of reaction showed a “tolerance” of pedophilia.

Yesterday the Pentagon announced another transfer of weapons to the Ukrainian military:

According to the Pentagon, the package includes:

The $400 million is being sent to Ukraine through the Presidential Drawdown Authority (PDA), which allows President Biden to send arms straight from US military stockpiles.

The Pentagon is clearly scraping the bottom of the barrel.

By: MikeRivero
Tags: RUSSIA/ UKRAINE /BELARUS /CRIMEA, WAR/DRAFT/ VETERAN AFFAIRS
Posted on: Nov 25 07:59
Message to Kyiv from Russian TV: "Zelensky and his circle will be the first to be hanged" (video)

Russian television predicts that something will happen soon to the president of Ukraine, V. Zelensky.

"The title of today's talk should be 'we have to look for justice ourselves.'

Zelensky and his circle should be the first to be hanged.

Zelensky should remember history. He and his circle must keep in their offices the memoirs of Pavel Sudoplatov. Their future is described in them – accurately.

In the future we may have to chase them around the world.

I am sure that all of them have been given guarantees by the British and American secret services" .

It matters who threatens V. Zelensky. It is the member of the Duma, Andrey Lugovoy, whose name was involved in the murder of Alexander Litvinenko.

We remind you that Alexander Litvinenko was poisoned by the radioactive isotope Polonium-210.

As we discussed last night, Sam Bankman-Fried has now demonstrated that he is both a pathological liar and a sociopath, the kind who in “explaining” to his employees how he stole billions (over $4 billion according to new FTX CEO John J. Ray) from the now bankrupt FTX, an act which left it insolvent and without liquidity, called it “loans” which were “generally” not used for “large amounts of personal consumption” (just “small amounts” used for such trivial items as $40 million penthouses and private jets). And the only reason we don’t officially call him a criminal just yet, is because he has not yet confirmed he used client money from his exchange to fund his personal hedge fund, an act which would cost any other individual decades in jail… but not prominent democrats like SBF or Jon Corzine, of course. Plus it’s the US legal system’s job to do that, not ours. Although we are growing increasingly skeptical this prominent Democratic donor will ever see the inside of a courtroom.

Thousands of workers across approximately 40 countries are planning to take part in 'Black Friday' protests to demand better wages and working conditions in the company's warehouses, as the global cost-of-living crisis increases 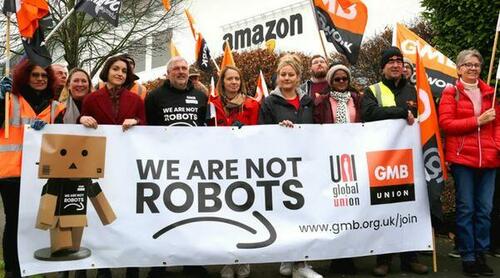 The protests will coincide with the largest holiday shopping season of the year, which means Amazon warehouse workers are going to be very busy for the next week as consumers panic buy deeply discounted items, though there might be a huge problem: less than 24 hours before the big sale begins, Bloomberg reported Amazon warehouse workers across 40 countries are about to strike.

We would note that the world's biggest retailer has longstanding ambitions to automate its warehouses - with robots that don't strike.

Amazon workers in the US, UK, India, Japan, Australia, South Africa, and across Europe are set to walk out of warehouses on Friday as they demand higher wages and better working conditions amid the worst inflationary environment the world has seen in decades.

The labor action is called "Make Amazon Pay" and is coordinated by an army of trade unions, with support from civil society and environmental groups.