Jordan’s King Abdullah II has said he is prepared for conflict should the status quo regarding holy sites in occupied East Jerusalem change, warning that there are "red lines" not to be crossed.

"If people want to get into a conflict with us, we’re quite prepared," the Jordan sovereign told CNN in an exclusive interview earlier this month, which was broadcast on Wednesday.

The interview was held on the East Bank of the Jordan River where Jesus was believed to have been baptised. The location was symbolically important as the king spoke of the ancient Christian presence in both Jordan and Jerusalem, and the hardships they face due to Israel’s policies.

The COVID-19 Omicron XBB.1.5 subvariant nearly doubled in prevalence over the past week, data from the U.S. Centers for Disease Control and Prevention (CDC) showed on Friday, with it now comprising over 40 percent of new cases in the United States.

The XBB.1.5 subvariant appeared in the United States around late November and has roughly doubled in prevalence every week since, according to CDC data. It accounts for the majority of current COVID-19 cases in the U.S. northeast, at around 75 percent of cases in the New York tri-state area and New England.

The network showed Don Lemon and revelers in New Orleans dancing to Juvenile’s “Back That Azz Up” as midnight approached and 2022 ended without a countdown or a mention.

Lemon may have noticed seconds too late. As he threw beads into the dancing crowd, he could be heard saying something about a countdown just after midnight. The song continued a bit longer, leading to an awkward split-screen image of fireworks and hugs in Nashville, also in the Central time zone, while 2023 slips in unnoticed in New Orleans:

Deutsche Bank and JPMorgan Chase are asking a federal court to throw out lawsuits that claim the big banks should have seen evidence of sex trafficking by Jeffrey Epstein, the high-flying financier who killed himself in jail while facing criminal charges.

The banks said in filings late Friday they didn’t commit any negligent acts that caused harm to the women who filed the lawsuits and that the lawsuits failed to show that they benefitted from Epstein’s sex trafficking.

The filings in federal district court in New York came about a month after two women who were both identified as Jane Doe sued the banks and the government of the U.S. Virgin Islands, where Epstein had a home on a small island that he owned.

The lawsuits, which seek class-action status to represent other Epstein victims, claim that the banks knowingly benefitted from Epstein’s sex trafficking and “chose profit over following the law” to earn millions of dollars from the financier.

Parents of students at one of the nation's top-ranked high schools are demanding its principal be fired after she and other officials delayed informing students that they had qualified for a national award.

The decision by brass at Thomas Jefferson High School for Science and Technology in Fairfax, Virginia, was reportedly part of a new school strategy meant to provide 'equal outcomes for every student, without exceptions.'

That is another way of describing current woke buzzword 'equity,' which prioritizes equal outcomes, instead of equal opportunities.

"Lying there, scratched and swollen, your brow burning, in your world, your bath. You still believe that justice is possible? You still believe all men are equal? Do you still believe that all occupations are equally satisfying, equally rewarding? And that no man wants to be greater than the others? How does the old song go? One always bakes the most delicate cakes. Two is the really superb masseur. Three sets your hair with exceptional flair. Four’s brandy goes to the Emperor. Five knows each trick of advanced rhetoric. Six bred a beautiful brand-new rose. Seven can cook every dish in the book. And eight cuts you flawlessly elegant clothes. You still believe that these eight would be happy if each of them could climb so high, but no higher before banging their heads on equality? If each could be only a small link in a long and heavy chain?" The Marquis de Sade,  Peter Weiss, "The Persecution and Assassination of Jean-Paul Marat as Performed by the Inmates of the Asylum of Charenton Under the Direction of the Marquis de Sade. "

By: MikeRivero
Tags: CURRENT EVENTS, EDUCATION
Posted on: Jan 01 07:17
Corrupt Actors in the Government, in Universities, and at the EIC Worked with Big Tech to Censor Americans
Kanekoa the Great is back on Twitter and he released an incredible thread on the efforts of the Deep State to censor conservatives on Twitter.
By: orraz
Tags: CURRENT EVENTS
Posted on: Dec 31 19:57
Judge Temporarily Blocks California Law Forcing Restaurant Chains To Raise Fast-Food Wages
A judge has temporarily blocked California from implementing a new law that would raise wages for fast food workers.
By: mayaleo
Tags: CURRENT EVENTS
Posted on: Dec 31 19:55
Pelosi Raises Salary Cap For House Staffers To $212,100 As Bidenflation Hurts American Families
“As you know, our hard-working, patriotic Congressional staffers are integral to the functioning of the House of Representatives: ensuring this institution can effectively carry out our legislative and constituent responsibilities,” Pelosi said in a letter.
By: mayaleo
Tags: CURRENT EVENTS
Posted on: Dec 31 19:54
77 members of Congress have violated a law designed to prevent insider trading and stop conflicts-of-interest

Insider and several other news organizations have identified 77 members of Congress who've recently failed to properly report their financial trades as mandated by the Stop Trading on Congressional Knowledge Act of 2012, also known as the STOCK Act.

Congress passed the law a decade ago to combat insider trading and conflicts of interest among their own members and force lawmakers to be more transparent about their personal financial dealings. A key provision of the law mandates that lawmakers publicly — and quickly — disclose any stock trade made by themselves, a spouse, or a dependent child.

But many members of Congress have not fully complied with the law. They offer excuses including ignorance of the law, clerical errors, and mistakes by an accountant. Insider has chronicled this widespread nature of this phenomenon in "Conflicted Congress," an ongoing reporting project initially published in December.

While lawmakers who violate the STOCK Act face a fine, the penalty is usually small — $200 is the standard amount — or waived by House or Senate ethics officials. Ethics watchdogs and even some members of Congress have called for stricter penalties or even a ban on federal lawmakers from trading individual stocks.

A MASSIVE, $1.7 TRILLION FUNDING BILL WAS APPROVED IN THE US CONGRESS LAST FRIDAY AND WILL BECOME LAW ONCE SIGNED BY PRESIDENT BIDEN.

And once that happens, it will bring into force proposed legislation introduced last year, INFORM Consumers Act, designed to regulate a sensitive segment of online marketplaces, delving deep into and disclosing sellers’ personal data under some circumstances.

In case these third parties carry out 200 or more transactions with revenues reaching $5,000 or more during one year, platforms like Amazon, eBay, Facebook and others will acquire their bank account numbers, government issued ID, tax identification numbers, and contact information, the original proposal read.

As per the bill’s text, online marketplaces will make sure that consumers have access to sellers’ names and contact information, but also other unspecified data, included in product listings. This will include sellers’ phone number and email and physical address.

However, sellers will be able to protect their phone number and address if they communicate with buyers by answering their customer support via the marketplaces.

By: MikeRivero
Tags: COMPUTERS/INTERNET, DICTATORSHIP, ECONOMY
Posted on: Dec 31 12:02
Paul Pelosi's attacker pleads not guilty to state criminal charges - after already denying the ambush in federal court and waiving his right to a trial within 60 day

The man accused of breaking into Nancy Pelosi's San Francisco home and beating her husband with a hammer has pleaded not guilty to state charges.

David DePape, 42, appeared in a California court on Wednesday wearing a jail-issued orange sweater, sweatpants and a black facemask as he denied the charges against him for the October 28 attack on Paul Pelosi.

He only spoke once during the hearing, Mercury News reports, to confirm that he wanted to waive his right to a trial within 60 days.

Judicial Watch announced today that it received 115 pages of records from the Department of Health and Human Services (HHS) revealing previously redacted locations of COVID-19 vaccine testing facilities in Shanghai, China. The Food and Drug Administration (FDA) had claimed the name and location of the testing facilities were protected by the confidential commercial information exemption of the Freedom of Information Act (FOIA).

The records were obtained through a September 2021 FOIA lawsuit filed after the FDA, the Centers for Disease Control and Prevention and the National Institute for Allergy and Infectious Disease failed to respond to a June 7, 2021, FOIA request for all biodistribution studies and data for the COVID-19 vaccines (Judicial Watch v. U.S. Department of Health and Human Services (No. 1:21-cv-02418)).

A study by SpaceX to use private spacecraft to reboost the Hubble Space Telescope has NASA weighing options to give Hubble new life. 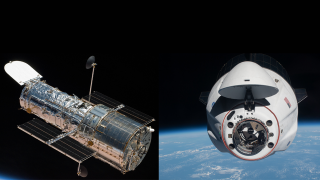 A study by SpaceX to use private spacecraft to reboost the Hubble Space Telescope has NASA weighing options. (Image credit: NASA/SpaceX)

NASA is looking deeper into the possibility of using a private spacecraft to lift the Hubble Space Telescope to new heights, giving the influential space observatory a new lease on life.

On Dec. 22, the space agency issued a Request for Information regarding a non-exclusive SpaceX study earlier this year that suggested how the Hubble Space Telescope could be "reboosted" into a higher orbit.

NASA's request for information, which you can read here, comes as it continues to consider the space telescope's future and will remain open until Jan. 24, 2023.

By: MikeRivero
Tags: SCIENCE/ HEALTH/ CLIMATE/ NATURE
Posted on: Dec 31 11:30
Court Finds Floridas Transgender Bathroom Policies Are Not Discriminatory
The 11th U.S. Circuit Court of Appeals has found that Florida’s policy of separating school bathrooms based on biological sex is not discriminatory or unconstitutional.
By: orraz
Tags: CURRENT EVENTS
Posted on: Dec 31 11:29
Heres How The Military Dropped Its Standards In 2022 To Address A Major Recruiting Crisis

The military’s standards for committed members and new recruits have dropped in 2022 as the services struggle to overcome challenges in filling the ranks.

Army recruiting plummeted in 2022, while the remaining services just made their recruiting goals for the fiscal year ending Sept. 30, according to Department of Defense (DOD) data shared with the Daily Caller News Foundation. The military is scrambling to adjust policies in a way that attracts more recruits, prompting some lowering of physical fitness and academic standards that could negatively impact military readiness, a military expert told the DCNF.

“The military and the administration are trying to overcome the greatest recruiting challenge they have ever faced by reducing certain standards,” Thomas Spoehr, director of the Heritage Foundation’s Center for National Defense, told the DCNF. (RELATED: The Military Vaccine Mandate Has Been Overturned, But Unvaccinated Troops Still Risk Reprisal)

The Navy opened up the service to more prospective sailors who score at minimum levels on entrance examinations that test physical and mental aptitude on Dec. 5, Cmdr. David Benham, a Navy Recruiting Command spokesperson, told Military.com. New guidelines will allow 7,500 recruits, or roughly 20% of the new active duty enlisted cohort, from the lowest acceptable aptitude level to join.

While the Navy met its fiscal year 2022 recruiting goal with a surplus of just 42 sailors, the target for 2023 raises the ceiling by an additional 4,000 new applicants, according to Military.com. Officials insisted the change did not reflect a lowering of standards.

“As we continue to navigate a challenging recruiting environment, changing the AFQT requirement removes a potential barrier to enlistment, allowing us to widen the pool of potential recruits and creating opportunities for personnel who wish to serve,” Benham told the outlet.