"History teaches us who we could be." -- Michael Rivero Video footage recorded by the Maricopa County Tabulation and Election Center’s live drop box camera and released by We The People USA Alliance shows multiple individuals driving up to the drop box and depositing numerous and sometimes entire stacks of ballots at a time.

This is why leftist groups sued to ban Patriots from filming dropboxes in Arizona.

740,000 ballots were accepted and counted without the proper chain of custody documentation in violation of Arizona Law.

Public health officials are urging appropriate precautions before Thanksgiving to help slow the spread of coronavirus and respiratory viruses.

“COVID is still with us, albeit at a much lower level,” Dr. Anthony Fauci, the White House’s chief medical adviser, reminded.

He said people should get vaccine booster shots and take a COVID-19 test before gathering for the holiday. He also advised strict adherence to standard hygiene practices amid an unusually aggressive sure in influenza and respiratory syncytial virus, more commonly known as RSV.

“Wash your hands frequently because that virus, RSV, can actually stick on surfaces for a while,” Fauci said.

He added that if you’re visiting someone who is especially vulnerable to infections, a mask remains a helpful tool to slow the spread of disease.

A large number of kids with RSV has pediatric hospitals stretched thin on resources and staff. It can be serious in adults, too.

Boston Dynamics, the company behind the creepy robot dogs deployed briefly by the NYPD last year, has accused a competitor of ripping off its designs — and allowing them to be weaponized.

Boston Dynamics filed a lawsuit in a Delaware court this week against Philadelphia-based Ghost Robotics, alleging that the firm violated Boston Dynamics’ patents on its quadrupedal robot designs, even as it makes them available to be deployed for violent purposes.

Boston Dynamics announced in early October that it is staunchly against the weaponization of its robots in any form.

“We believe that adding weapons to robots that are remotely or autonomously operated raises new risks of harm and serious ethical issues,” Boston Dynamics wrote in an open letter in October.

Only days after a midterm election that dragged on for days beyond Election Day, Pennsylvania’s attorney announced the arrest of a Democratic consultant for orchestrating ‘widespread’ ballot fraud that included forging thousands of signatures.

Attorney General Josh Shapiro on Wednesday announced the arrest of Rasheen Crews, a Philadelphia-based Democratic consultant, for charges related to forging signatures on nomination petitions to get his clients on the ballot for the 2019 Democratic primary races in Philadelphia.

“In advance of the 2023 municipal elections, this arrest is an important reminder that interfering with the integrity of our elections is a serious crime,” said AG Shapiro. “By soliciting and organizing the wide scale forgery of signatures, the defendant undermined the democratic process and Philadelphians’ right to a free and fair election. My office is dedicated to upholding the integrity of the election process across the Commonwealth, to ensure everyone can participate in Pennsylvania’s future.”

Yes, you are being replaced. Once derided as a racist conspiracy theory, “replacement theory” is not only confirmed but even touted by Democrat Sen. Chuck Schumer who yesterday claimed that millions of illegals must be granted amnesty because the US population “is not reproducing on its own.”

Of course, that’s because so-called “vaccine” injections — actually mRNA depopulation bioweapons — are causing widespread abortions, stillbirths, infertility and deaths. As expert analyst Ed Dowd told this reporter yesterday, post-vaccine excess mortality across the population at large is running around 32%, meaning an extra 2,400+ Americans are dying each day thanks to the mRNA jabs. And that’s on top of the 7,700 or so that normally die each day, bringing the total daily deaths in America right now beyond 10,000.

After pushing the genocidal vaccine, Sen. Schumer’s claim that “we have a population that is not reproducing on its own” seems tone deaf. Does he not realize his own vaccine mandates are killing off Americans? (Most likely, he knows full well.)

Arizona GOP gubernatorial candidate Kari Lake has announced that she will not concede the race to Democrat Katie Hobbs.

In a video address on Thursday, Lake maintained that she is still in the fight.

This comes after the Associated Press called the race in favor of Hobbs on Monday.

The Trump-endorsed Republican said that this past week has confirmed everything she has been saying about the elections in Arizona.

“When we called for Katie Hobbs to recuse herself, they ridiculed us… turns out, we were right,” Lake stated. “The Fox was guarding the hen house and because of that, voters have been disenfranchised.”

Lake continued to explain that polling stations had problems with tabulating machines and printers on election day.

The Republican announced that she has assembled a great legal team to “right these wrongs.”

The Washington Post has published a piece post-midterm elections that once again clears former President Donald Trump’s name and reputation.

Reports for months prior to Election Day claimed that Trump might have been conducting nefarious business activities with classified documents he reportedly took with him after he left the White House in January 2021 and which formed the basis for the FBI’s unprecedented raid on his Mar-a-Lago home in early August.

On Monday, the Post reported that federal investigators “believe former president Donald Trump’s motive for allegedly taking and keeping classified documents was largely his ego and a desire to hold on to the materials as trophies or mementos.”

By: MikeRivero
Tags: POLITICS/ ELECTIONS/ CORRUPTION
Posted on: Nov 17 13:16
End of an era: Pelosi steps down as House Democratic leader

After leading the Democrats for the last two decades, the House Speaker announced Thursday that she will step down next year from her spot at the top of the party, closing a momentous run for the most powerful woman in U.S. history while clearing the way for a younger generation of up-and-coming lawmakers to climb into the leadership ranks.

The announcement, which came shortly after late midterm results had officially flipped House control to the Republicans, sent shockwaves across Capitol Hill, as lawmakers in both parties grappled with the thought of a Democratic House without Pelosi at the helm.

Yet the departure is only partial: Pelosi will cede her formal leadership seat, but remain in Congress indefinitely, where she’s aiming to assume a mentorship role and grease the transition for whichever new leader fills the mantle. Such a role would be unprecedented in modern memory — most leaders who step down quickly leave Congress — but Pelosi is not one to do things by the book.

Webmaster addition: With the House now being under Republican control, Nancy would not be able to remain Speaker.

FTX investor Edwin Garrison filed a lawsuit on Tuesday against founder and former CEO of FTX Sam Bankman-Fried. In addition to Bankman-Fried, Garrison’s proposed class-action lawsuit goes after Brady, Curry and other high-profile celebrities who endorsed the crypto exchange, which is now bankrupt.

In addition to naming Curry, the lawsuit also names his entire NBA team, the Golden State Warriors, who advertised for FTX in their arena.

President Trump has taken the stage in a ballroom at Mar-a-Lago and has officially announced he will run in 2024.

Trump took the stage to the song “God Bless The USA” which many who were in the room when the song was played brought goosebumps.

The 45th President would then waste no time and state that his administration turned the page of globalist sell-outs and one-sided trade deals”.

How is it always the same county experiencing massive election issues?

Maricopa County has almost become a synonym for election fraud in the dictionary and citizens, election judges, and journalists are all speaking out against the ‘irregularities’ that occurred there…

You know, like voting tabulators not accepting ballots—one of the usual Democrat manipulation techniques.

Katie Hobbs is being touted as the winner in Arizona’s Governor race; however, before the announcement a Kari Lake staffer made a special request to Governor Ducey’s office to conduct a special investigation into Maricopa County.

This was the scene at many polling places across Maricopa County:

This same scene played out tens of thousands of times all across Maricopa County. How many voters were disenfranchised or simply ran out of time? If the majority of ED voters were Democrats, this would be the number 1 news story in America still today. Total joke pic.twitter.com/noY1RRQv0Q

Citizens from all across Maricopa County voiced the difficulties and issues they faced in voting on election day and it begs the question: why do we use voting machines at all?

Hand-counted, paper ballots worked for ages and these new machines are not trusted by enormous swaths of the population:

Folks, we are not in the business of spreading fake news or creating conspiracy theories.

So let’s just take a look at the facts.

In this article, we are sharing videos from the ground in Maricopa County.

And election day voters, who tend to be Republican, had issues having their ballots counted.

But here’s the key: these things are all on video.

So take a look for yourself. 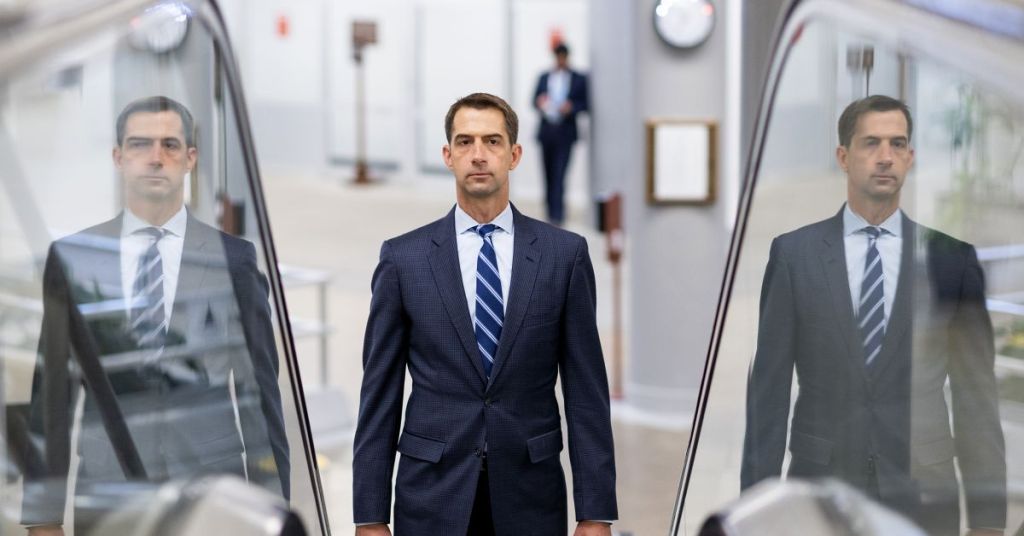 The liberal left wants people to think there is only one leader in the Republican Party.

They want people to think that former President Donald Trump is the only person that can lead the conservative movement. But the truth is that more than one person has emerged as a strong candidate to lead the Republican Party.

Tom Cotton is a senator from Arkansas who addressed the public to set the record straight. The hope that the Democrats have is that by vilifying Trump and making people think that he is all there is for the right, they will vote for a liberal instead.