Horrifying Pestilences Are Starting To Run Wild All Over The Globe

How many millions have to die before people start to realize what is happening?  For years, I have been persistently warning that we would soon enter an era of great pestilences, and now it is here.  Sadly, what we have witnessed over the past few years is just the tip of the iceberg.  At this point we have been perfectly primed for future pandemics because vast numbers of people all over the planet are now running around with compromised immune systems.  That means that diseases will now be able to spread even more easily, and this is a trend that we have already started to see all throughout 2022.

Strep A is the latest illness to run wild in the western world.  The number of children being admitted to the hospital with Strep A is way above normal in the U.S., and this appears to particularly be true in the western half of the country…

Webmaster addition: I would suggest that all these new "pestilences" are being invented as cover for the massive damage caused by the mRNA shots.

Natalie–17,000 MDs have just signed a letter demanding that the vaccines be stopped because they are dangerous and unsafe. Is CTV going to cover that? Of course not because your “ethics” don’t allow you to cover a story that is contrary to Trudeau’s narrative and Pfizer wouldn’t like it.

By: MikeRivero
Tags: CANADA, CONSUMER RIGHTS / PRODUCT REPORTS, CORPORATE MEDIA, COVER-UP/ DECEPTIONS/ PROPAGANDA, DICTATORSHIP, SCIENCE/ HEALTH/ CLIMATE/ NATURE
Posted on: Jan 03 12:14
GORDON CHANG: China Must Be Shaking Its Head In Disbelief At The Biden Admins Stunningly Bad Decision-Making
“I’ve come to expect so little from the federal government,” Kevin Cramer (R-N.D.) told Newsmax. “Even at that standard, this was underwhelming, to say the least.”
By: orraz
Tags: CURRENT EVENTS
Posted on: Jan 03 12:13
Michael Burry: "US Is In Recession, Fed Will Cut And Will Cause Another Inflation Spike"

In the waning days of 2022, one of the most bearish (and accurate, at least as far as last year was concerned) strategists, SocGen's resident permabear Albert Edwards, laid out what he thinks will be the big surprise of 2023, which will be "a return to deflation fears as headline CPI inflation drops close to, or likely below zero. Investors are already anticipating recession and have an unusually strong preference for bonds."

Edwards' also expects that while the current recession and collapse in commodity prices will also cause headline inflation to collapse, core inflation will abate too but remain sticky around 3% due to residual wage-price inflation (justifying the inevitable change in the Fed's target).

By: MikeRivero
Tags: ECONOMY
Posted on: Jan 03 12:13
The U.S. Has a New Partner in the Fight Against China | Opinion

Beijing is not pleased.

Tokyo just announced it will soon acquire the ability to destroy faraway targets with cruise missiles. On Friday, Japan released its National Security Strategy along with the National Defense Strategy and the Defense Buildup Program.

China's Tokyo embassy immediately announced it had issued a diplomatic protest for "stirring up tension and confrontation in the region."

Why is Beijing upset? Tokyo correctly labeled China as Japan's No. 1 national security threat; the National Security Strategy called the Chinese regime "the biggest strategic challenge, unlike anything we have seen before."

A new book alleges President Joe Biden had a vulgar outburst when finding things left behind in the White House by former President Donald Trump, thinks the Secret Service is a covert hive of “MAGA sympathizers” and disbelieved agents were attacked by his dog Major on the White House grounds.

According to a Saturday report in the New York Post, author Chris Whipple says in “The Fight of His Life: Inside Joe Biden’s White House,” to be published Jan. 17, that Biden “would let loose” on the “former guy” when he gave friends private White House tours.

“Biden unleashed his ire on an upstairs room where Trump had installed a big-screen TV and a golf simulator that allowed him to practice his swing to the virtual backdrop of famous courses,” the Post reported.

“What a f***ing a**hole,” Biden told one guest, according to the book.

This, mind you, isn’t the first — or most widely covered — report of Biden’s vulgar outbursts in recent weeks.

In December, Politico reported that the president was bugged about discussions regarding his age going into the 2024 election.

“The president has vented to allies about how often his age is mentioned in the press — ‘You think I don’t know how f***ing old I am?’ he said to one earlier this year,” the outlet reported.

In contrast to castigations of “hate speech” and the increasingly common notion that “hate speech isn’t free speech,” MIT is siding with the Constitution.

Free expression is a necessary, though not sufficient, condition of a diverse and inclusive community. We cannot have a truly free community of expression if some perspectives can be heard and others cannot. Learning from a diversity of viewpoints, and from the deliberation, debate, and dissent that accompany them, are essential ingredients of academic excellence.

Free expression promotes creativity by affirming the ability to exchange ideas without constraints. It not only facilitates individual autonomy and self-fulfillment, it provides for participation in collective decision-making and is essential to the search for truth and justice. … Academic freedom promotes scholarly rigor and the testing of ideas by protecting research, publication, and teaching from interference.

That principle means on-campus guests can’t be relegated to a single perspective:

There is evidence showing that the most toxic part of SARS-CoV-2, the spike protein, is acting like a prion, or a misfolded protein that has the ability to transmit its misfolded shape onto normal variants of the same protein. Proliferation of prions in the brain is associated with neurodegenerative diseases such as Parkinson’s, Alzheimer’s, Creutzfeldt-Jakob disease (CJD), and amyotrophic lateral sclerosis (ALS).

In this interview with The New American, MIT scientist Dr. Stephanie Seneff discusses the pre-print article titled “SARS-CoV-2 Spike Protein in the Pathogenesis of Prion-like Diseases” and explains the deadly mechanisms by which mRNA-induced spike protein wreaks havoc in the human body, and in the brain in particular. Remarkably, some of the blood cells can continuously produce spike protein for months after vaccination, possibly through reverse transcription of the mRNA into DNA, which amplifies the damage.

The doctor touched on the hypothesis of the late Nobel Prize laureate Dr. Luc Montagnier on the inserts of Human Immunodeficiency Virus (HIV) in SARS-CoV-2 genome and argued that the virus was most likely engineered as a bioweapon. Still, while the spike proteins from the natural Covid infection do pose the discussed risk, it is nowhere near the damage potentially inflicted on one’s body by the vaccine-related mRNA-induced spike proteins, observed Dr. Seneff.

The doctor urged the parents not to vaccinate their children with mRNA shots because of the wide spectrum of harm that they inflict.

Medical personnel rushed to the field and he was administered CPR, before being given oxygen and taken to the hospital. Game play was temporarily suspended at 9:18 pm before the game was officially postponed by the league at 10:01 pm EST. Not long after, the NFL revealed he was in “critical condition” in a statement. The Buffalo Bills also provided an update about Damar’s condition on Twitter. “Damar Hamlin suffered a cardiac arrest following a hit in our game versus the Bengals,” the team wrote. “His heartbeat was restored on the field and he was transferred to the UC Medical Center for further testing and treatment. He is currently sedated and listed in critical condition.”

While we wait to learn more about the pro football player’s health, here are five things to know about Damar Hamlin.

Webmaster addition: But they do not mention his vaccination status, because after all, that''s only important when you want to get into a restaurant or store or school!

FTX founder Sam Bankman-Fried has asked a judge to conceal the identities of two people who will help secure his bail in addition to his parents' house in Palo Alto, California, Bloomberg reports. 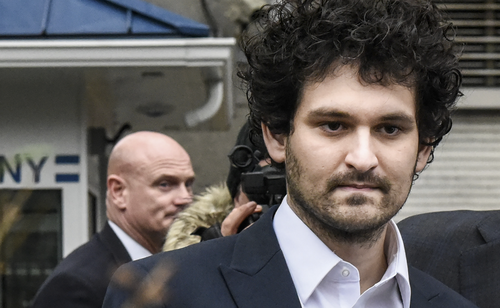 "If the two remaining sureties are publicly identified, they will likely be subjected to probing media scrutiny, and potentially targeted for harassment, despite having no substantive connection to the case," wrote SBF's lawyers in a letter filed on Tuesday seeking redactions of the names of the two individuals who intend to sign as sureties to his bail.

"Consequently, the privacy and safety of the sureties are “countervailing factors” that significantly outweigh the presumption of public access to the very limited information at issue," the letter continues.

Bankman-Fried's $250 million bail package - granted in his first appearance on US soil since his arrest in the Bahamas, was secured by his parents' Palo Alto home, which is worth nowhere near that amount. The judge in the case also required that two people of "considerable means," at least one of whom cannot be a relative, also sign the bond.

Bankman-Fried was granted a $250 million bail package in December, one of the largest in US history. The personal recognizance bond approved by the judge was secured by the equity in Bankman-Fried’s parents home in Palo Alto, California, which is almost certainly not worth anywhere near that amount. But outsized bonds are more a means of establishing harsh financial consequences for bail-jumping and are often backed by assets worth only around 10% of the stated amount. -Bloomberg

The two individuals have not yet signed the bond but intend to do so by the Jan. 5 deadline, according to the letter.

The Gateway Pundit has been reporting for years that these experimental vaccines are not safe and effective. Now, controlled corporate media finally starting to ask real questions about these shots.

A recent article published in the Wall Street Journal suggested that the Covid outbreak heavily affected most vaccinated people. More and more research points to the possibility that repeated vaccinations make people more vulnerable to XBB and contribute to the rapid evolution of the virus.

It can be recalled that the Centers for Disease Control and Prevention (CDC) announced it is monitoring a new COVID-19 variant known as “XBB,” which is responsible for all new infections in the United States.

At the start of 2023 Earth will be visited by a newly discovered comet that may just be bright enough to be spotted with the naked eye.

The comet, named C/2022 E3 (ZTF), is currently passing through the inner solar system. It will make its closest approach to the sun, or perihelion, on Jan. 12, and will then whip past Earth making its closest passage of our planet, its perigee, between Feb. 1 and Feb. 2.

If the comet continues to brighten as it currently is, it could be visible in dark skies with the naked eye. This is difficult to predict for comets, but even if C/2022 E3 (ZTF) does fade it should still be visible with binoculars or a telescope for a number of days around its close approach.

The Department of Homeland Security decided to drop a bombshell release about an upcoming terrorist attack on Saturday, New Year’s Eve. According to the intelligence, al Qaeda is actively recruiting new suicide bombers to use aircraft in attacks on the United States that are similar to what took place on September 11, 2001. They will use different strategies and tactics, according to the memo.

Even though this was an internal memo, they knew with a certainty because of the vastness of the drop that it would be leaked to the press. As of two days following the drop, no corporate media outlet in the United States has reported on it.

Alabama’s constitutional carry law took effect January 1, 2023, meaning law-abiding Americans in 25 states can now carry a gun for self-defense without paying the government a fee or getting government permission.

General Motors (GM) gave a grant to an organization that supplies elementary schools with books promoting the transgender ideology.