It’s not hard to make Joe Biden look bad — when Joe Biden is around to do it himself.

Amid Tuesday’s furor over news that classified documents had been found in a suite of Washington, D.C., offices Biden used in his post-vice presidency period, damaging video from a 2018 interview resurfaced that shows Biden declaring he had no access to “classified information.”

As it turns out, classified information wasn’t all that far away.

A truck-mounted billboard has appeared in Washington, D.C., carrying a three-word message directed at one man — the president of the United States:

Actually, the full text of the message is six words, if you count the three smaller words in blue type (“MOST DEMOCRATS SAY”), which lead into the main message in large, red letters: “DON’T RUN JOE. “

The Pentagon has officially dropped the U.S. military's COVID-19 vaccine mandate nearly 17 months after it was first imposed by the Biden administration under Defense Secretary Lloyd Austin.

The controversial policy has been under fire from Republicans since its inception, amid an increasingly dire recruiting crisis for new troops.

Defense officials' latest order follows through on language in the 2023 defense budget bill, which President Joe Biden signed into law in late December.

After admitting to being the man in the video, Gwin, whose clients once included David Rockefeller and Arnold Schwarzenegger, tried to defend his actions, claiming she had become psychotic and was turning over garbage cans.

'I said you have to move, I cannot clean the street, move down,' Gwin told The San Francisco Chronicle. 'She starts screaming bellingent things, spitting, yelling at me... at that point she was so out of control... I spray her with the hose and say move, move. I will help you.' He added he is a 'champion' for trying to help her previously. 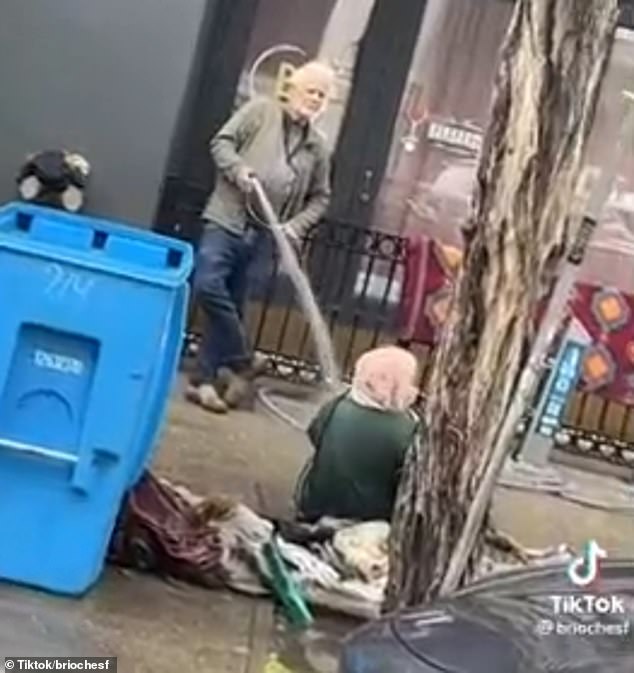 Collier Gwin, the owner of Foster Gwin Gallery, was seen in a now viral video spraying a homeless woman in San Francisco with a hose. The incident occurred on Monday as weather hit a low of 49 degrees

Independent journalist Andy Ngo told Breitbart News in an exclusive interview that Big Tech companies compel journalists to “lie” or engage in self-censorship in order to stay on the social media platforms and not face punishment or suspension.

“What was really disturbing to me about Twitter’s content moderation before the regime change is that journalists could be actually punished for reporting the truth,” Ngo told Breitbart News editor-in-chief Alex Marlow at Turning Point USA’s recent AmericaFest conference in Phoenix, Arizona.

For example, “Every year there’s a day called ‘Trans Day of Remembrance,’ which is a day where activists say that there is a genocide of trans people in the United States that is driven by white supremacy and transphobic fascism and transphobic hate,” Ngo said.

Ngo went on the say, “And I looked at the data. You have usually around three dozen homicides of trans people — each one is tragic, I’m not diminishing those deaths — but you compare that to the population: One, that’s not a genocide. Two, you look at who are the suspects who are alleged or convicted as murderers, and they’re overwhelmingly black males. That may be an inconvenient truth, it’s the truth of the data. I reported that out in 2019, and that was found to be a violation of Twitter’s ‘hate speech’ policy, so I was forced to delete it or not be on the platform. I chose ultimately to delete it.”

A report by the Rand Corporation on the growing influence of China and Russia in Africa found that Beijing is not far behind Moscow in exporting weapons and private military contractors to African nations, especially those participating in China’s Belt and Road Initiative (BRI).

Webmaster addition: And the US isn't doing exactly the same thing?

The Biden administration has finally acknowledged a return to the 2015 Obama-led nuclear deal with Iran is no longer on the agenda, and the Iranians are to blame for “killing the prospect,” State Department Spokesman Ned Price said on Monday.

Price also said that the U.S. and Israel are in lockstep about preventing Iran from acquiring nuclear weapons.

Without specifying exactly what position she would run for, Abrams told Drew Barrymore on her daytime talk show that she will be back again.

“I will likely run again,” Abrams said. “If at first you don’t succeed, try try again. If it doesn’t work, you try again.”

Despite her two losses, Democrats still consider Abrams a rock star for her fundraising skills and her get-out-the-vote apparatus in the state of Georgia.

“My first responsibility is to make sure anyone who wants to vote can,” she told Barrymore. “Protecting democracy is not about a person. It’s about the ideals.”

Flights across the United States were affected Wednesday morning after the Federal Aviation Administration said it experienced a computer outage.

All flights in the U.S. were grounded following the incident, a source with knowledge of the situation told NBC News.

The FAA said in a notice on its website that its Notice to Air Missions (NOTAM) system had "failed" Wednesday morning. A NOTAM is a notice containing information essential to workers involved in flight operations.

"Technicians are currently working to restore the system and there is no estimate for restoration of service at this time," it said.

By: MikeRivero
Tags: COMPUTERS/INTERNET
Posted on: Jan 11 07:21
BREAKING: Purchase of AR-15s, AK-47s to be banned in Illinois

On Tuesday, the Illinois House passed House Bill 5471, or the "Protect Illinois Communities Act," described as "one of the strongest assault weapons bans in the country" by Democrat leaders in the state.

According to local news, the bill creates an "immediate ban on the sale and possession of defined assault weapons, although current legal owners may continue to keep their weapons under a grandfather clause. The ban also includes .50-caliber rifles and cartridges and rapid fire devices known as 'switches.' Magazines will have a limit of 10 bullets for long guns and 15 for handguns."

President Biden's taxpayer-funded wall for his Delaware vacation home is getting while he continues to voice his staunch opposition to building a wall at the southern U.S. border.

Photos obtained exclusively by the Daily Mail show construction on the wall around Biden's Rehoboth Beach, Delaware home began last week. The wall is expected to cost taxpayers $490,324 because its being funded through a government contract through the Department of Homeland Security (DHS).

The photos show the ongoing construction of tall white fencing and gray stone pillars on the side of Biden's home, with a half-wall of gray stone and a large black iron gate at the front of the property.

By: MikeRivero
Tags: IMMIGRATION/GLOBALISM, WHITE HOUSE
Posted on: Jan 10 17:52
HUGE: Matt Gaetz Reveals Republicans Will Release the 14,000 Hours of J6 Tapes That Have Been Hidden

Looks like we will finally get the full story on what really happened on January 6th. Congressman Matt Gaetz (R-FL) told Charlie Kirk today on Kirk’s radio show that the new Republican Congress will unveil the hidden J6 tapes.

Gaetz told Charlie Kirk that releasing the tapes “would give more full context to that day rather than the cherry-picked moments of the January 6th committee.”  He further explained this is one example of the deal made with Kevin McCarthy to provide the American people the truth rather than the lies propagated by the Biden Regime.

When Attorney General Merrick Garland announced Nov. 18 that he had named a special prosecutor to investigate former President Donald Trump's handling of classified documents found at the Mar-a-Lago compound, the government harbored a fresh secret: The current president, Joe Biden, had a similar problem.

Just two weeks earlier, Biden's lawyers disclosed to government lawyers on Nov. 2 — just six days before the midterm elections — that they had found sensitive government documents with classified markings inside an office that Biden used at the Penn Biden Center think tank in Washington after he left office as Barack Obama's vice president.

The public was kept in the dark about the startling discovery until Monday, when the White House confirmed it was cooperating with an investigation launched by the Justice Department at the request of the same National Archives that has tussled with Trump over the last year.

The belated disclosure turned the political tables on Biden, who sharply criticized Trump for his document debacle last fall, while also raising troubling new questions that will be need to be answered by a U.S. Attorney in Illinois and Congress.

The apprehensions all took place in the Del Rio Sector of the border and began on Jan 2., when agents apprehended a 45-year-old Mexican national with a prior conviction for indecency with a child.

He had been sentenced and later deported in 2005 for the crime. Agents encountered him coming across among a group of six migrants trying to sneak past agents inside a rail yard.

Colombian Vice President Francia Marquez, who was elected on a history-making ticket in August, has said her security detail has foiled an assassination attempt close to her home.

On Twitter on Tuesday, Marquez, the country’s first Afro-Colombian vice president, said her security had carried out “the deactivation and destruction of a high-capacity explosive device” in the road leading to her family home in the village of Yolombo in Colombia’s southwest.

House Republicans and Democrats on Tuesday joined forces and voted overwhelmingly in favor of a new committee to examine U.S. strategic competition with China, after House Speaker Kevin McCarthy declared on the House floor that neither Republicans nor Democrats trust China anymore.

"We spent decades passing policies that welcomed China into the global system," McCarthy said. "In return, China has exported oppression, aggression and anti-Americanism. Today, the power of its military and economy are growing at the expense of freedom and democracy worldwide."

"It didn’t start under this administration, but the current administration has clearly made it worse," McCarthy said. "Its policies have weakened our economy and made us more vulnerable to the threat of the CCP."

Monday marked the opening day for the 56th Legislative Session, but before getting down to business, the Arizona Freedom Caucus (AFC) and a group of Republican Legislators from the House and Senate met with the press to state they would be filing a lawsuit against newly-inaugurated Arizona Gov. Katie Hobbs (D).

“It’s become a modern phenomenon for Executive Branches across the country to try and legislate via executive order. We saw it with Barack Obama. We see it now with Joe Biden. And now, seemingly, Katie Hobbs, she also believes that she has the ability to legislate with the power of the pen, attempting to create law that simply does not exist,” State Sen. Jake Hoffman (R-Queen Creek), said, leading the conference.

The AFC took issue with this first Executive Order, stating Hobbs was using this order to push her “woke agenda.”

“The people of Arizona did not elect Katie Hobbs to rule by executive fiat,” Hoffman said. “Yet sadly for our state, Katie feels, just as she’s shown a propensity for during her time as Secretary of State, that she is above the law and does not need to follow the laws this legislature passes. That is wrong.”