It’s cool that Jews have framed this persecution narrative as such that whenever they are about to get attacked for things they actually did, they can say “hey, fellow Jews – they’re about to start blaming us for these very specific things that we did not do.”

If you find yourself confused about the mixed guidance when it comes to Covid-19 vaccines and safety concerns, you’re not alone.

While the Centers for Disease Control (CDC) is marketing widespread use of the vaccines in the U.S. for both old and young alike; many other countries have limited Covid-19 vaccine use under certain conditions. Health officials around the world are giving varying advice on safety issues as Covid-19 vaccines are given to more people, and more information is collected.

Below are summaries of some of the concerns that have emerged or been raised by medical officials.

The rushed “warp speed” development and approval of completely novel Covid-19 mRNA and DNA vaccines pushed on millions of people has resulted today in millions of reported injuries and deaths according to public health databases such as VAERS (US), Eduravigilance (EU), Yellow Card (UK) and others.  In March 2022 a package of 466 pages of Pfizer non-clinical submission (animal studies) to the FDA was obtained by Judicial Watch via FOIA. This article is an updated version of my previously published review of these documents.  The cursory nature of the entire preclinical program for mRNA injections conducted by Pfizer can be briefly summarized as “we did not find any safety signals because we did not look for them”. The omissions of standard safety studies and glaring scientific dishonesty in the studies that were performed are so obvious that they cannot be attributed to the incompetence of the manufacturers and regulators.  Rather, the questions of fraud and willful negligence should be raised.

The focus of my review was the scope and adequacy of the program of non-clinical assessment for a novel gene therapy “vaccine” with a brief discussion of relevant regulatory frameworks.  I did not dive deeply into the results of specific animal studies.  My goal is to illustrate the complete breakdown of the previously known to be rigorous ethical drug development process, as well as the shocking negligence on the part of the regulatory agencies that are supposed to keep the pharmaceutical manufacturers honest.  It turns out that both the regulators and the manufacturers were highly dishonest and pushed an entirely novel technology and product on millions of people without a single well designed toxicology assessment.

Dr. Anthony Fauci, the outgoing top medical adviser and director of the National Institute of Allergy and Infectious Diseases, is under fire by social media users for being obsessed with himself.

Fauci sat down for an interview with the New York Times on his last day in office, which was December 30. The opening sentence of the article read, “The walls in Dr. Anthony S. Fauci’s home office are adorned with portraits of him, drawn and painted by some of his many fans.” The author of the Times article observed that “Dr. Fauci seemed a little uncomfortable with people knowing about the pictures.”

“He said that previously, when they were captured on camera, the ‘far right’ attacked him as an ‘egomaniac,’” Sheryl Gay Stolberg wrote. “If someone goes to the trouble of sending him a portrait of himself, he said, he would ‘feel like I’m disrespecting them’ if he discarded it.”

It's not often that stargazers get the opportunity to spot a comet with the naked eye.

But at the end of this month – or possibly the start of February – a newly-discovered space rock will whizz by our planet and light up the night sky.

C/2022 E3 (ZTF) was discovered in March last year while inside Jupiter's orbit, and will make its closest approach to the sun on January 12 and Earth on February 2.

AccuWeather meteorologists are tracking a potent storm that is poised to unleash severe weather across the South with snow and ice farther north and west over areas that have already received a surplus of wintry precipitation so far this season.

Winter storm warnings have been issued from the Rockies to the Great Lakes to cover for the heavy snow and ice expected with this storm.

A storm that crashed onshore in California with flooding rain and mountain snow at the beginning of the weekend tracked over the Four Corners region on Sunday before beginning a northeastward track across the nation’s midsection on Monday. 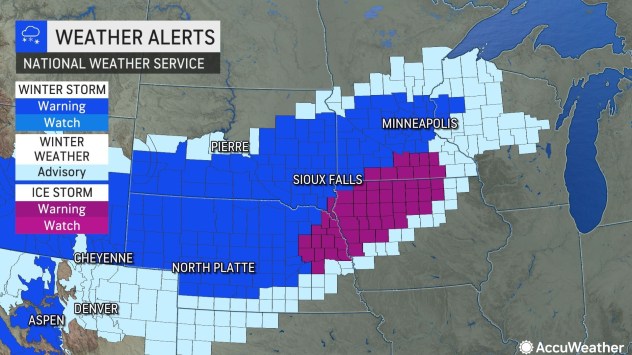 “As mild, moist air is catapulted into the Southern and Central states early in the week and results in soaking rain and severe weather, the back side of the storm will have cold and snowy conditions filtering into the northern Plains and east of the Rockies,” AccuWeather Meteorologist Nicole LoBiondo said.

Unlike the massive storm that swept across the country in the days leading up to Christmas and unleashed days of heavy snow with blizzard conditions across the North Central states, AccuWeather meteorologists say the worst conditions with more than 6 inches of snow possible will target a rather narrow corridor of the northern Plains and Upper Midwest.

Despite the worst conditions expected to only encompass a rather compact zone, AccuWeather experts say that travel both on the road and in the air will once again be significantly impacted by this system from Monday to Tuesday.

Within the corridor of heaviest snow, a swath of 6-12 inches is likely from portions of South Dakota and Nebraska to Minnesota and Wisconsin. A smaller area, extending from northwest Nebraska to southwest Minnesota, is more likely to see over a foot of snow.

In a letter leaked to Politico by the White House Thursday, President Joe Biden’s Special Counsel Richard Sauber told Republican Congressmen James Comer, incoming Chair of the House Oversight Committee, and future Chair of the Judiciary Committee Jim Jordan the administration has “no immediate plans” to respond to the multitude of records requests sent by the both of them for upcoming investigations.

In his letters published by Politico, allegedly without reaching out to the Republicans for comment per the House Judiciary GOP, Sauber claimed that the requests were constitutionally illegitimate under the justification that the 118th GOP-led House Of Representatives has not yet entered session.