Bob Bauer, the president’s personal attorney, said in a statement that during the search, which took place over nearly 13 hours Friday, “DOJ took possession of materials it deemed within the scope of its inquiry, including six items consisting of documents with classification markings and surrounding materials, some of which were from the President’s service in the Senate and some of which were from his tenure as Vice President. DOJ also took for further review personally handwritten notes from the vice-presidential years.”

Those six items are in addition to materials previously found at Biden’s Wilmington residence and in his private office.

The federal search of BIden’s home, while voluntary, marks an escalation of the probe into the president’s handling of classified documents and will inevitably draw comparisons to his predecessor, former President Donald Trump – even if the FBI’s search of Trump’s residence was conducted under different circumstances.

The FBI five months ago obtained a search warrant to search Trump’s Florida residence, Mar-a-Lago, an unprecedented step that was taken because federal investigators had evidence suggesting Trump had not handed over all classified materials in his possession after receiving a subpoena to turn over classified documents to the National Archives. Trump’s handling of classified material at Mar-a-Lago is also the subject of a special counsel investigation led by Jack Smith.

A coalition of news organizations is seeking evidence surrounding the alleged home invasion of Paul Pelosi’s residence in October.

The media outlets filed a court motion last week seeking the release of evidence introduced in David DePape’s preliminary hearing. This comes as other stories across the country, such as Biden’s classified documents blunder, have been stealing some of the clout of this bizarre episode.

DePape, a Canadian illegal immigrant, faces a list of charges including attempted murder stemming from an incident in which he allegedly broke into Pelosi’s San Francisco home and bludgeoned him with a hammer.

On Friday, Jan. 13, Treasury Secretary Janet Yellen wrote to Congress that the U.S. government will hit its borrowing limit on Jan. 19, forcing the new Congress into negotiations over the debt limit much sooner than expected. She said she will use accounting maneuvers she called “extraordinary measures” to keep U.S. finances running for a few months, pushing the potential date for default to sometime in the summer. But she urged Congress to get to work on raising the debt ceiling.

Lifting it above its current $31.385 trillion limit won’t be easy with a highly divided and gridlocked Congress. As former Republican politician David Stockman crowed in a Jan. 11 article:

15 [House] votes and the slings and arrows of MSM opprobrium were well worth it. That’s because the GOP’s anti-McCarthy insurrection obtained concessions which just might slow America’s headlong rush to fiscal armageddon. And just in the nick of time!

We are referring, of course, to the Speaker elect’s promise that there will be no more debt ceiling increases without off-setting spending cuts; and that in the event of a double-cross a single Member of the House may table a motion to vacate the Speaker’s chair.

Even if Congress succeeds in raising the debt ceiling, the Federal Reserve’s aggressive interest rate hikes are likely to push interest on the federal debt to unsustainable levels. The problem was detailed by the House Republican Policy Committee like this:

As of December 8, 2022, the U.S. gross national debt stood at nearly $31.5 trillion, $8.5 trillion higher than it was just three years before and the highest level in our nation’s history. Last year [in March 2021], the Congressional Budget Office (CBO) projected the federal government would spend $282 billion servicing our debt in 2022, but that projection ballooned to nearly $400 billion as the Federal Reserve tightens monetary policy and the debt continues to grow.

After working for Joe Biden on and off for more than three decades, White House Chief of Staff Ron Klain is expected to step down in coming weeks because he's 'ready to move on,' the NY Times reports. 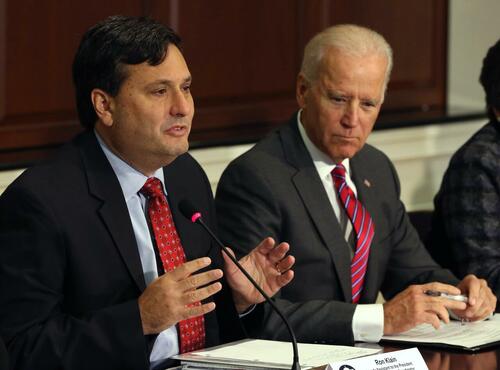 The news of Klain's departure comes one day after the White House threw senior adviser Anita Dunn under the bus for the decision to 'keep the public information flow to a trickle' regarding President Biden's classified document scandal.

FLOWCHART: How Jennifer Siebel Newsom used taxpayer dollars to trade with herself, her nonprofit organization, and her for-profit business. The organization refused to disclose how much of their screening revenues came from California public schools. 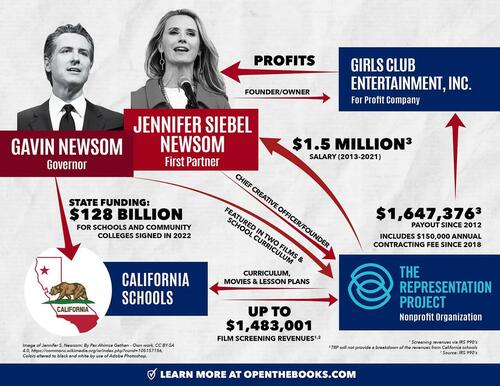 California Governor Gavin Newsom and his wife, Jennifer Siebel Newsom, are the dream team. He runs the state and she’s a nonprofit founder, entrepreneur, and filmmaker.

While her husband attends to state business, Siebel Newsom engages in her passion: advancing "gender justice” through her charitable nonprofit The Representation Project. According to tax documents the organization is “committed to building a thriving and inclusive society through films, education, and social activism.”

We previously reported that while the governor engaged in the highly unethical practice of soliciting 1,000 state vendors for $10.6 million in campaign cash, the first partner, Jennifer Siebel Newsom, solicited state vendors and the governor’s campaign donors for large gifts to her charity, The Representation Project.

The court ruled 5–4 that the free speech clause of the First Amendment prohibits the government from restricting independent expenditures for political campaigns by corporations and overruled an earlier decision that banned corporations from making “electioneering communications.”

Rep. Adam Schiff (D-Calif). said in a press release he and Democrat colleagues introduced the “Democracy For All Amendment” to “overturn legal precedents that have allowed unrestrained campaign spending and dark money to corrupt American democracy.” He has introduced the constitutional amendment every year since 2013, according to the release.

“The flow of unrestricted corporate and dark money into our elections has dangerously eroded the American people’s faith in our democracy, and in our government’s ability to deliver for them and their families,” Schiff said in a press release. “Citizens United was one of the most egregious enablers of special interest money, but it was only the latest in a long line of Supreme Court cases that opened the floodgates. To truly rein in dark money, we must amend our Constitution.”

The Internal Revenue Service (IRS) has issued an alert to taxpayers, encouraging them to adjust their 2023 withholding so as to either avoid effectively giving the government an interest-free loan of their money or face the prospect of penalties and interest if too little tax is withheld.

National Security Advisor Jake Sullivan met with Israeli Prime Minister Benjamin Netanyahu in Jerusalem on Thursday in the first high-level US visit to the country since the new Israeli government was sworn in.

Among other topics, Netanyahu and Sullivan discussed the possibility of Israel normalizing relations with Saudi Arabia. Both Israel and the US want to see Israel normalize with more Gulf Arab nations, as it did with the UAE and Bahrain under the Abraham Accords, as part of a plan to build an anti-Iran alliance in the region.

Publicly, Saudi officials seem reluctant to work toward normalization with Israel, but the two countries have been quietly boosting some cooperation. Netanyahu called for the US to mend its relations with Saudi Arabia after the Biden administration publicly feuded with the Kingdom over OPEC+ oil production cuts that were announced in October.

It's a terrible time for America's liberal media - with companies laying off, implementing hiring freezes, and other cost-cutting measures. Some media companies have even collapsed in valuation. Many are blaming increasing macroeconomic uncertainty that has crushed advertising revenues.

A wave of recent layoffs has hit media companies, including CNN, Buzzfeed, Paramount Global (the parent to CBS, MTV, VH1), The Walt Disney Company, Comcast, Roku, Morning Brew, Gannett (parent company to USA Today), and many more in the past year.

Add Vox Media, which owns brands like The Verge, SB Nation, and New York magazine, to the growing list of media layoffs.

Axios obtained an internal memo from CEO Jim Bankoff to staff about reducing headcount by 7%. About 1,900 people work for the company, which equates to about 133 layoffs.

Bankoff noted that the headcount reduction would impact teams across revenue, editorial, operations, and core services.

"While we are not expecting further layoffs at this time, we will continue to assess our outlook, keep a tight control on expenses and consider implementing other cost savings measures as needed," he said, adding layoffs were a last resort.

In November 2021 I wrote a piece entitled “Have We Finally Reached Peak Davos?” This article was scarily spot on. When you’ve written as much as I have over the past five years, however, it’s easy to look back and point at how prescient you were.

Even if you’ve gotten a whole lotta stuff wrong, which I have.

That particular article, though, was nearly point-for-point correct in assessing the state of The Davos Crowd’s Great Reset project.

I wrote a Twitter thread about this the other day to pound the next few nails in Davos’ coffin before the opening of this year’s convocation of clueless globalists.