Sen. Bernie Sanders presses Moderna not to jack up price of COVID-19 vaccine: 'Now is not the time for unacceptable corporate greed'
Left-wing Sen. Bernie Sanders issued a letter to Moderna CEO Stephane Bancel urging the company not to increase the price of its COVID-19 vaccine.
By: orraz
Tags: CURRENT EVENTS
Posted on: Jan 11 13:08
Homeowner Opens Fire On Crook Who Broke Into His Residence In Search Of BMW Key Fob And The Perp Is Caught On Video Running For His Life
A New Jersey homeowner opened fire on a suspect who broke into his Roseland residence early Monday morning in search of a key fob for a BMW parked in the homeowner's driveway — and the would-be car thief was caught on video running for his life, WNBC-TV reported.
By: mayaleo
Tags: CURRENT EVENTS
Posted on: Jan 11 13:07
FTX Boss SBF Aided Biden's CIA Agenda For Weapons To Ukraine

Here in Part 4 of this series on FTX, the world’s second largest cryptocurrency exchange, whose CEO Samuel Benjamin-Fried steered into bankruptcy by doing the impossible, which is to deplete nearly all its supposedly code-protected accounts, raises a slew of questions that panicked account holders, for instance, at CoinBase that just fired more than a 1,000 employees.

So the question is: Did SBF act alone as a rogue banker or was he run by the Treasury Department with overseas assistance from the CIA? During its final year of operation, 2022, nearly all FTX customer accounts were drained of cash to finance the bogus Aid For Ukraine “charity”, which served as cover for purchasing state-of-art weapon systems from major U.S. defense contractors for shipment by the Biden Pentagon to Kyiv, free of charge, including shipping, training of operators and cost for the first batch of samples, as discussed in this report. As for the political motive of “enlightened imperialism” the bloodshed in Ukraine is directly linked to the bloodthirsty Biden-Obama-Clinton Democrats who orchestrated the vicious Contra Wars in Central America, the illegal invasion of Yugoslavia and the jihadist Arab Spring spree of assassinations and terrorism, and now the vote-rigging to reinstall a thieving-leftist cabal in Brazil.

Do I blame Sam BF for this latest outrage? No, it’s all the fault of the lazy, perverted, doped up brain-dead parasites on freebie “student loans” who followed their marching orders from local Democrat paymasters to vote for Joe Biden, a known crook. The voting age should therefore be raised to 35 to keep this nation solvent and free of debt to the Chinese and Jews.

All eyes are on Bakhmut (Artyomovsk), a Donbass city-turned-meat grinder for the Ukrainian Armed Forces, which are sustaining heavy losses there. Mark Sleboda, a US military veteran and international affairs and security analyst, has explained to Sputnik why the city is so important for both sides of the conflict.

“First of all, from a level of its significance, one of the Russian military priorities was to secure all the Donbass, to secure the liberation of the entirety there,” Mark Sleboda told Sputnik. “And that being kind of right in the center of the Donetsk region, Bakhmut has often been called the key to Donetsk. So, of course, all of that area has to be liberated (…) Bakhmut is also a major transport and logistical hub because it's got two highways that intersected and railroads that run north all the way to Moscow and then they go through south and then bend around down into Donetsk city.”

Second, Bakhmut is the linchpin of the entire second line of defense of the Kiev regime, the US military veteran continued.

“After that, there's only one last defensive line in Donetsk of any major node between Slavyansk and Kramatorsk, further to the west,” Sleboda noted.

Ukraine has been receiving consignments of controversial cluster munitions from Türkiye, Foreign Policy magazine has reported. Kiev had been asking Washington for the Cold-War-era weapons for months.

The shipments have been taking place since November, current and former US and European officials told the outlet. It was unclear how many of the munitions had been received, or whether they had yet been used on the battlefield.

The weapons in question are called dual-purpose improved conventional munitions, or DPICMs. They were designed during the Cold War era, when NATO was planning to deploy them against a large-scale Soviet invasion of Europe. The rounds are filled with dozens of submunitions, intended to strike personnel and light-armored targets, scattering over a large area for increased lethality.

A heavily indebted pension fund serving the European Parliament has been found to have used taxpayer money to purchase shares in various arms, tobacco, mining and fossil fuel companies, EUobserver reported on Tuesday.

The news outlet claims to have obtained “a detailed breakdown” of the fund’s investments between 1994 and 2010. According to the documents, MEPs held tens of thousands of shares in several arms manufacturers known for producing cluster munitions, which have been banned by the EU since 2008.

Those companies included US giants Raytheon, Honeywell International and Textron, all of which were known to produce the deadly weapons, considered dangerous to civilians.

The largest military and defense corporations of NATO member states have seen a 21.5% boost in market value in 2022 amid the military operation in Ukraine and the rearmament in Europe, Vedomosti newspaper reported on Wednesday, citing data from Defense News and Tradingview analytics.

The ranking included 25 companies with a capitalization of over $1 billion which are traded on the stock market and have military products dominating in their revenues, and are also actively involved in arms supplies to Ukraine.

Evidence is building that the first galaxies formed earlier than expected, astronomers announced at the 241st meeting of the American Astronomical Society in Seattle, Washington.

As the James Webb Space Telescope views swaths of sky spotted with distant galaxies, multiple teams have found that the earliest stellar metropolises are more mature and more numerous than expected. The results may end up changing what we know about how the first galaxies formed.

Webmaster addition: What the James Webb telescope shows us is that it is time to re-examine that primary assumption of a Big Bang moment of creation.

By: MikeRivero
Tags: SCIENCE/ HEALTH/ CLIMATE/ NATURE
Posted on: Jan 11 12:09
Drag show featuring people with Down syndrome in UK sparks concerns of exploitation: 'People with Down syndrome like sex'
A new promotional video for a U.K. drag show company, which has been around for several years, has sparked outrage over concerns that the performers, all of whom have Down syndrome, are being exploited.
By: orraz
Tags: CURRENT EVENTS
Posted on: Jan 11 12:09
Teacher arrested after overdosing on fentanyl in front of students; police discover drugs in classroom closet
A New Jersey middle school teacher was arrested after he allegedly overdosed on drugs while in the classroom.
By: orraz
Tags: CURRENT EVENTS
Posted on: Jan 11 12:08
'Critical Theory Is The Framework' Used To Train Teachers: K-12 Public Schools 'Saturated' With CRT Due To Teachers' Education, Report Finds
A new Monday report finds that California public schools are "saturated with critical theory ideology" and "divisive rhetoric" because future teachers are trained using a "critical theory" framework.
By: mayaleo
Tags: CURRENT EVENTS
Posted on: Jan 11 12:07
EXPOSED: Vitamin D Treatment for C-19 Completely Vindicated By New Scientific Study!

In fact, it works really well!

Here is my friend Kyle Becker with more on his Substack:

Senator Bernie Sanders has blasted Moderna for 'unacceptable corporate greed' after DailyMail.com revealed the firm's plan to jack up the price of its Covid shot.

In a letter sent this week to Moderna CEO Stéphane Bancel, Sen. Sanders asked the drugmaker not to go ahead with the from $26 to $130 price increases on its Covid vaccine, saying it could make the shot unaffordable for millions of Americans.

He added that raising the price of the shot was particularly offensive given that the US government provided more than $2billion in taxpayer money to fund the development of the vaccine.

Webmaster addition: It's all about the Benjamins!

Your voice could be digitally cloned and used to impersonate you, thanks to a creepy new AI called VALL-E.

AI has unveiled an artificial intelligence system capable of mimicking any human voice based on just three seconds of audio.

It can then be used to turn any written text into speech, making it possible for someone to put words in your mouth using the tool.

It's even designed to recreate the 'emotional range' and pacing of the speaker, making it a hyper accurate form of mimicry.

Well, Project Veritas is back at it again, and this time they captured a Pfizer bombshell on hidden camera.

A scientist by the name of Chris Croce admits on hidden camera that there’s a link between the vaccine and myocarditis… and they all know it.

Another Las Vegas student died last week after collapsing and being found unresponsive in a school bathroom.

“The Amplus community sends our love and condolences to the Brister family as well as to all of Jordan’s family, friends and acquaintances.”

According to Brister’s father, Conrad Brister, his son collapsed in the bathroom on Tuesday, Jan. 3, and may have been there for as long as 25 minutes before he was discovered. During that time, his heart stopped.

More than a fifth of the passwords protecting network accounts at the US Department of the Interior—including Password1234, Password1234!, and ChangeItN0w!—were weak enough to be cracked using standard methods, a recently published security audit of the agency found.

The audit was performed by the department’s inspector general, which obtained cryptographic hashes for 85,944 employee active directory (AD) accounts. Auditors then used a list of more than 1.5 billion words that included:

The results weren’t encouraging. In all, the auditors cracked 18,174—or 21 percent—of the 85,944 cryptographic hashes they tested; 288 of the affected accounts had elevated privileges, and 362 of them belonged to senior government employees. In the first 90 minutes of testing, auditors cracked the hashes for 16 percent of the department’s user accounts.

Webmaster addition: On this day in 2013, the news reported that Aaron Swartz committed suicide.

Bulletin: Nearly five years to the day of Swartz’s “suicide,” we are being told that his partner in programming James Dolan has “committed suicide” too.

The head of the private Russian military firm Wagner Group has announced pro-Moscow forces have taken control of the town of Soledar in the eastern Ukrainian region of Donetsk. Wagner chief Yevgeny Prigozhin admitted in a series of Tuesday and Wednesday comments that fighting in the area is still ongoing, but said "Units of the Wagner private military company have taken the entire territory of Soledar under their control," and that the Ukrainians are surrounded.

"The city center has been surrounded, and urban warfare is underway. The number of captives will be announced tomorrow," Prigozhin added. "No units other than Wagner PMC fighters were involved in the storming of Soledar." The Amsterdam-based Moscow Times and the AFP underscore that "If confirmed, the capture of Soledar would mark Russia’s biggest success in its war on Ukraine following months of retreats elsewhere." Prigozhin's emphasis that it was 'only Wagner' an no regular forces that stormed Soledar has reportedly unleashed anger and controversy inside the Russian chain of command.

The US Virgin Islands case against JP Morgan just got even weirder. 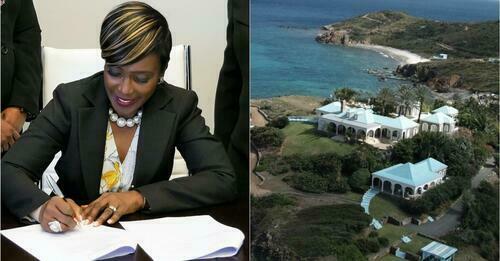 The original complaint against the bank filed by George included a lengthy-but-redacted section on "High Net Worth Clients" Epstein brought to JPMorgan. It had 11 separate entries spanning three pages of the complaint - which James O'Keefe of Project Veritas wants to get his hands on.

The original complaint notes that Epstein had an extensive relationship with former JPM Exec Jes Staley, who was CEO of Barclays until he resigned in 2001 over his ties to the pedophile. 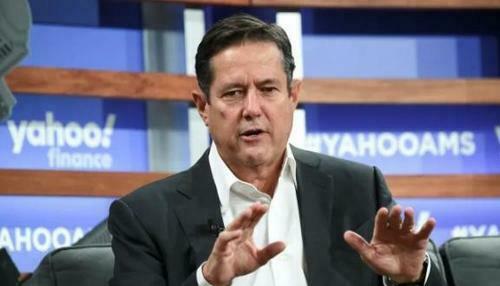 One week after George's firing, the US Virgin Islands has filed an amended complaint which significantly shortens the "High Net Worth Clients" list to just three entries, and unredacts a name we already knew about; Glenn Dubin, the owner of Highbridge Capital Management whose wife once told Epstein's probation officer that she was "100% comfortable" with Jeffrey Epstein being around her minor children.