"In a sense, bioterrorism phase one was rolled out. It was really all about keeping the population in fear and in isolation and preparing them to accept the vaccine, which appears to be phase two of a bioterrorism operation." -- Dr. Peter A. McCullough

Republican Thinks She Won Her House Race, Then a Recount Overturns the Race for the Dem by 10 Votes

If the 2022 midterm election taught Americans anything, it’s that every vote counts.

That lesson comes after many political races have come down to only a handful of votes or fewer — and now another Democrat has eeked out a victory after a recount.

Sarah Keitt, the Democratic candidate for the state’s 134th House district who previously conceded to Republican Meghan McCloat, won her seat in the race for Connecticut state representative by only 10 votes, the Trumball Times reported.

Arizona GOP gubernatorial candidate Kari Lake does not plan to go quietly into the night, at least not until her legal options are explored.

As of this writing, less than 17,000 votes separate Lake and Democrat candidate Katie Hobbs, which is .06 percent of the votes cast with ballots still being counted.

An automatic recount is triggered at when the difference is .05 percent or less.

Webmaster addition: The author's numbers are off. Katie Hobbs and Kari Lake are separated by .6% of the vote and a recount triggers at .5%.

Rep. Hakeem Jeffries (D-NY) appears to be the front-runner to replace Rep. Nancy Pelosi (R-CA) as House Democrat leader, even though he is an election denier.

As a lawyer from central Brooklyn, Jeffries is a self-described far-left Democrat who appears to be angling behind the scenes to win the Democrat House leadership position. He first assumed office in 2013 and has served as the chair of the House Democrat Caucus since 2019.

Jeffries’ presumable succession is notable because Democrats and the establishment have continually labeled some Republican politicians as election deniers. The same standard does not appear to be applied to Jeffries.

Jeffries has denied the outcomes of the 2016 election. In 2020, Jeffries tweeted that former President Donald Trump “will never” be accepted “as a legitimate President.”

“Keep pouting. History will never accept you as a legitimate President,” he tweeted at Trump. 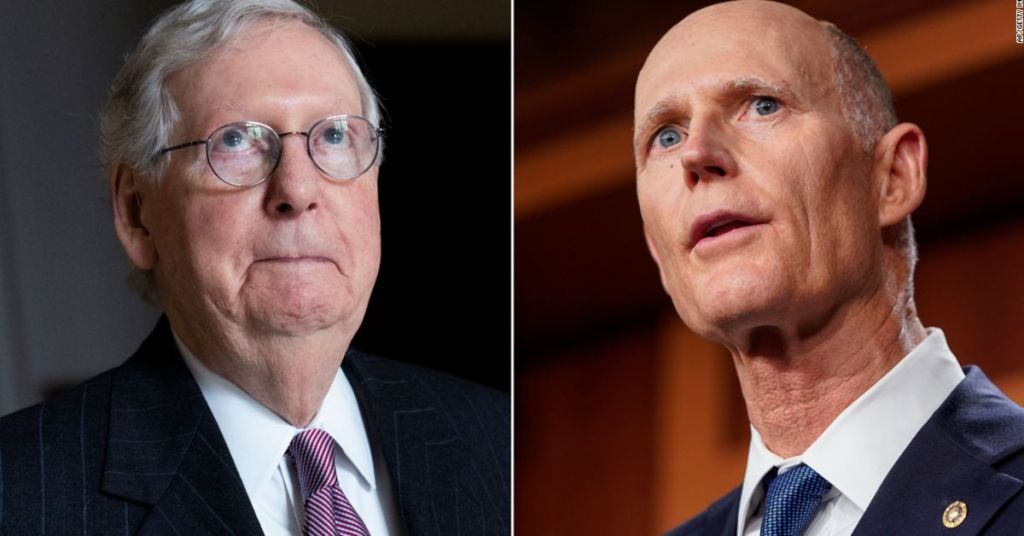 McConnell had 37 people backing him, while Scott only had 10.

McConnell is now the longest-serving Republican leader of all time. The previous record was held by Democrat Mike Mansfield decades ago. The New York Post reported that McConnell said, “I’m not going anywhere.” He knew he had the support to continue as the leader of the Republican Party. 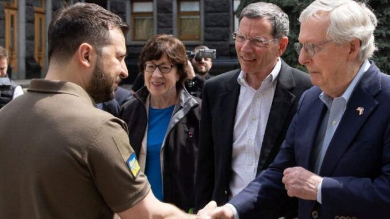 According to new FEC documents, Senate Minority Leader Mitch McConnell grabbed large sums of money from FTX and quietly pocketed it.
The documents show McConnell’s Senate Leadership Fund receiving $2,500,000 from someone at FTX, the crypto company that collapsed last week.

Thelibertydaily.com reports: The money goes from taxpayers, is sent as “aid” to Ukraine, which gives a good chunk of the laundered money to FTX, which contributes to the Uniparty Swamp. This prompts the Uniparty Swamp to repeat the process, and as we’ve seen over the past several months, it’s working wonders. Corporate media barely reports on all the money getting laundered there on a weekly basis. No Democrats and very few Republican politicians bring up the issue. Nearly everyone is on the take.

The Maricopa County Board of Supervisors was confronted by an angry activist over its poor handling of the week-long midterm election vote count.

“Once again, the eyes of the world are upon Maricopa County for another botched election. Am I here to accuse you of stealing the vote? Heavens no, because that would make me a terrorist, wouldn’t it?” Matt Baker told the board on Wednesday.

“Let me ask you: if you took your life savings to a bank, and the teller put them in the machine and the machine kicked out one out of four of your bills, and the teller said, ‘don’t worry, we’ll put them in Box 3 over here, and we’ll let you know how many were in there later. We’ll send them off to a separate location and someone will be sure to get back to you and tell you how much money you have. Would you be okay with that? No, you would not be okay with that.”

“Now ask yourself the question, which is more valuable, your vote or your money? Now ask a lobbyist that same question,” he continued, getting more fired up.

“Now ask a campaign manager that question. Now ask Mark Zuckerberg that question which is more valuable – your money or your vote, or your country, or this world, or the corruption that is taking over every single county in this nation!”

“And then you look into your own soul and you look back at yourself in the mirror and realize that you are the cancer that is tearing this nation apart!! Good day!” he concluded before exiting the podium. Video footage recorded by the Maricopa County Tabulation and Election Center’s live drop box camera and released by We The People USA Alliance shows multiple individuals driving up to the drop box and depositing numerous and sometimes entire stacks of ballots at a time.

This is why leftist groups sued to ban Patriots from filming dropboxes in Arizona.

740,000 ballots were accepted and counted without the proper chain of custody documentation in violation of Arizona Law.

Public health officials are urging appropriate precautions before Thanksgiving to help slow the spread of coronavirus and respiratory viruses.

“COVID is still with us, albeit at a much lower level,” Dr. Anthony Fauci, the White House’s chief medical adviser, reminded.

He said people should get vaccine booster shots and take a COVID-19 test before gathering for the holiday. He also advised strict adherence to standard hygiene practices amid an unusually aggressive sure in influenza and respiratory syncytial virus, more commonly known as RSV.

“Wash your hands frequently because that virus, RSV, can actually stick on surfaces for a while,” Fauci said.

He added that if you’re visiting someone who is especially vulnerable to infections, a mask remains a helpful tool to slow the spread of disease.

A large number of kids with RSV has pediatric hospitals stretched thin on resources and staff. It can be serious in adults, too.

Boston Dynamics, the company behind the creepy robot dogs deployed briefly by the NYPD last year, has accused a competitor of ripping off its designs — and allowing them to be weaponized.

Boston Dynamics filed a lawsuit in a Delaware court this week against Philadelphia-based Ghost Robotics, alleging that the firm violated Boston Dynamics’ patents on its quadrupedal robot designs, even as it makes them available to be deployed for violent purposes.

Boston Dynamics announced in early October that it is staunchly against the weaponization of its robots in any form.

“We believe that adding weapons to robots that are remotely or autonomously operated raises new risks of harm and serious ethical issues,” Boston Dynamics wrote in an open letter in October.

Only days after a midterm election that dragged on for days beyond Election Day, Pennsylvania’s attorney announced the arrest of a Democratic consultant for orchestrating ‘widespread’ ballot fraud that included forging thousands of signatures.

Attorney General Josh Shapiro on Wednesday announced the arrest of Rasheen Crews, a Philadelphia-based Democratic consultant, for charges related to forging signatures on nomination petitions to get his clients on the ballot for the 2019 Democratic primary races in Philadelphia.

“In advance of the 2023 municipal elections, this arrest is an important reminder that interfering with the integrity of our elections is a serious crime,” said AG Shapiro. “By soliciting and organizing the wide scale forgery of signatures, the defendant undermined the democratic process and Philadelphians’ right to a free and fair election. My office is dedicated to upholding the integrity of the election process across the Commonwealth, to ensure everyone can participate in Pennsylvania’s future.”

Yes, you are being replaced. Once derided as a racist conspiracy theory, “replacement theory” is not only confirmed but even touted by Democrat Sen. Chuck Schumer who yesterday claimed that millions of illegals must be granted amnesty because the US population “is not reproducing on its own.”

Of course, that’s because so-called “vaccine” injections — actually mRNA depopulation bioweapons — are causing widespread abortions, stillbirths, infertility and deaths. As expert analyst Ed Dowd told this reporter yesterday, post-vaccine excess mortality across the population at large is running around 32%, meaning an extra 2,400+ Americans are dying each day thanks to the mRNA jabs. And that’s on top of the 7,700 or so that normally die each day, bringing the total daily deaths in America right now beyond 10,000.

After pushing the genocidal vaccine, Sen. Schumer’s claim that “we have a population that is not reproducing on its own” seems tone deaf. Does he not realize his own vaccine mandates are killing off Americans? (Most likely, he knows full well.)

Arizona GOP gubernatorial candidate Kari Lake has announced that she will not concede the race to Democrat Katie Hobbs.

In a video address on Thursday, Lake maintained that she is still in the fight.

This comes after the Associated Press called the race in favor of Hobbs on Monday.

The Trump-endorsed Republican said that this past week has confirmed everything she has been saying about the elections in Arizona.

“When we called for Katie Hobbs to recuse herself, they ridiculed us… turns out, we were right,” Lake stated. “The Fox was guarding the hen house and because of that, voters have been disenfranchised.”

Lake continued to explain that polling stations had problems with tabulating machines and printers on election day.

The Republican announced that she has assembled a great legal team to “right these wrongs.”

The Washington Post has published a piece post-midterm elections that once again clears former President Donald Trump’s name and reputation.

Reports for months prior to Election Day claimed that Trump might have been conducting nefarious business activities with classified documents he reportedly took with him after he left the White House in January 2021 and which formed the basis for the FBI’s unprecedented raid on his Mar-a-Lago home in early August.

On Monday, the Post reported that federal investigators “believe former president Donald Trump’s motive for allegedly taking and keeping classified documents was largely his ego and a desire to hold on to the materials as trophies or mementos.”